West Ham are in desperate need to sign a striker in the January transfer window. Sebastien Haller left West Ham and moved to Ajax last January for around £20 million after the Ivorian forward failed to fit into the Premier League with the Hammers. Haller has since gone on to smash it at Ajax, recording 35 goals and 13 assists in 48 games in all competitions. But now they find themselves in a desperate search of a striker who can ease the pressure off Antonio. Antonio has had a poor injury record, and Moyes needs to get in a striker as soon as possible to boost their hopes of qualifying for the Champions League next season.

One of those players who has turned the heads of the Hammers is Blackburn man Ben Brereton Diaz. One of this season’s surprise stars in the second division, the Chilean international has been in fine form for Blackburn Rovers so far. The 22-year-old has scored 20 goals in the Championship and has helped fire Blackburn into second place on the league table. The former Nottingham Forest forward is currently second in the goalscoring charts in the Championship, bested only by Alexsander Mitrovic, who has bagged an astonishing 27 goals for Fulham. 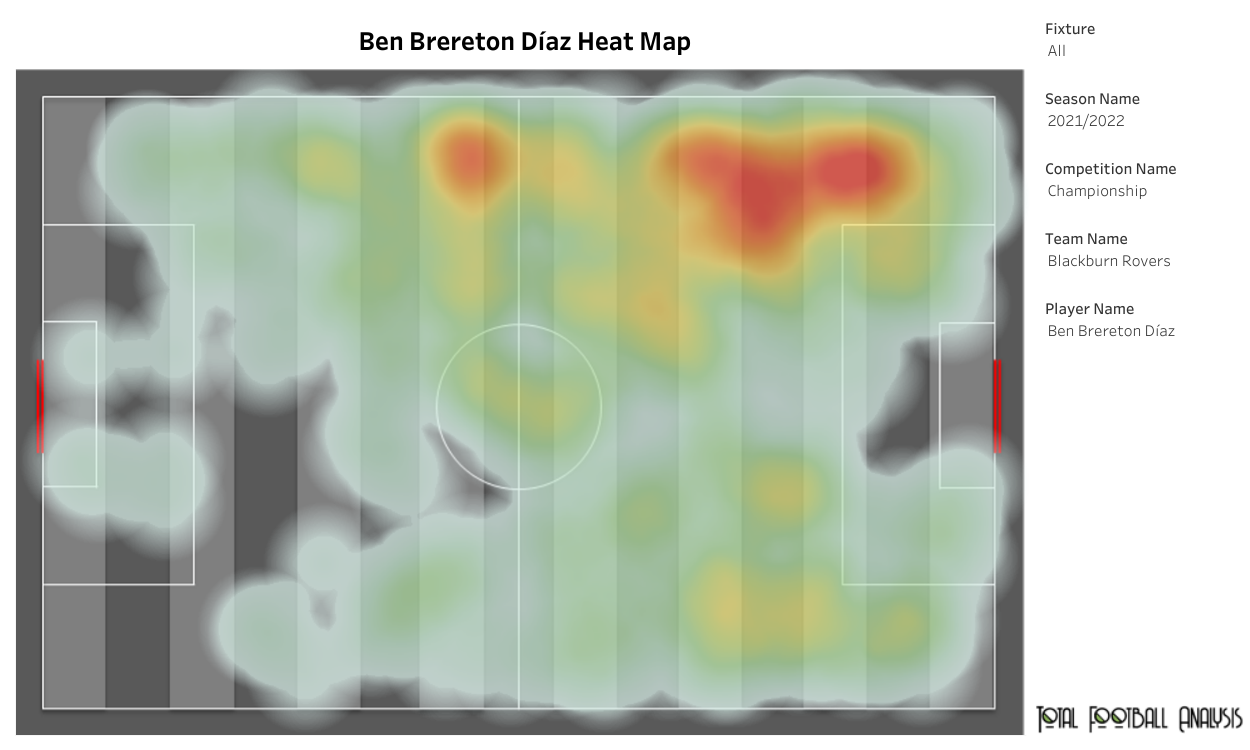 Blackburn have been lining up in a 4-3-3 setup under Mowbray, and his formation has brought the best out of Diaz. The presence of Tyrhys Dolan in a false nine helps Diaz and Gallagher to play on either side of Dolan and gives the forwards enough space to move forward into the final third. Diaz has been lining up as a wide forward on the left since the start of the season, and he has done well in that position. 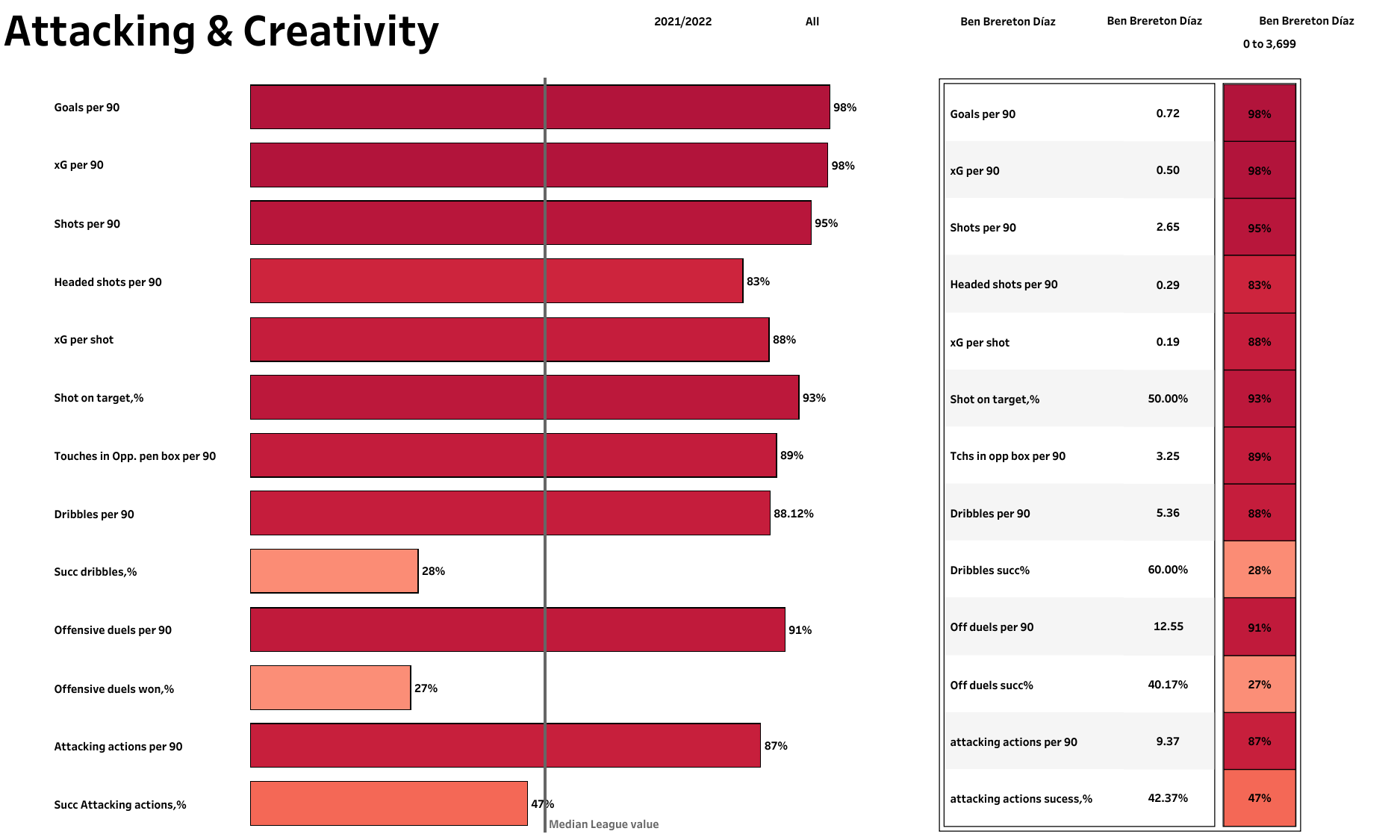 The above visual shows us the attacking and creativity stats for Ben Brereton Diaz from the ongoing 21-22 Championship season. As seen in the visual, Diaz has put up impressive numbers and has been significantly better than the median league value. He has an xG of 0.5 per 90 minutes and has attempted 2.65 shots on average. Diaz has great ball carrying abilities and has attempted 5.36 dribbles per 90 minutes. He has also been able to complete 60% of these duels and can get into great positions with these dribbles. 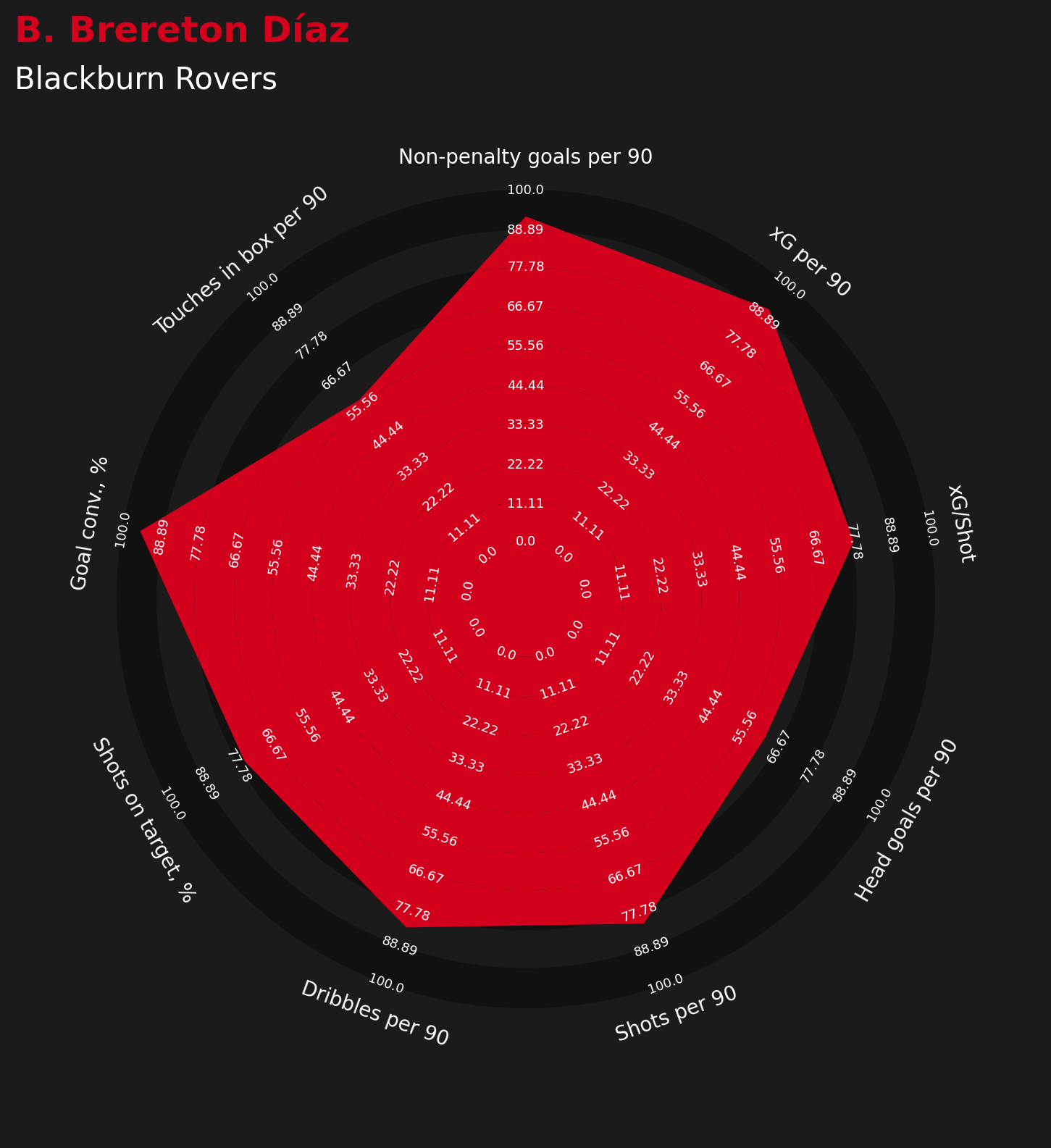 The above visual shows us the radar for the attacking and creativity metrics for Tielemans in the Premier League. All the data above is in percentile values calculated for the players within his league. In this case, the 50th percentile is the league median of selected players’ positions. The radar indicates that Brereton has been significantly better than most of the strikers in the league. He has a very high conversion rate and also has a high number of non-penalty goals in the league. 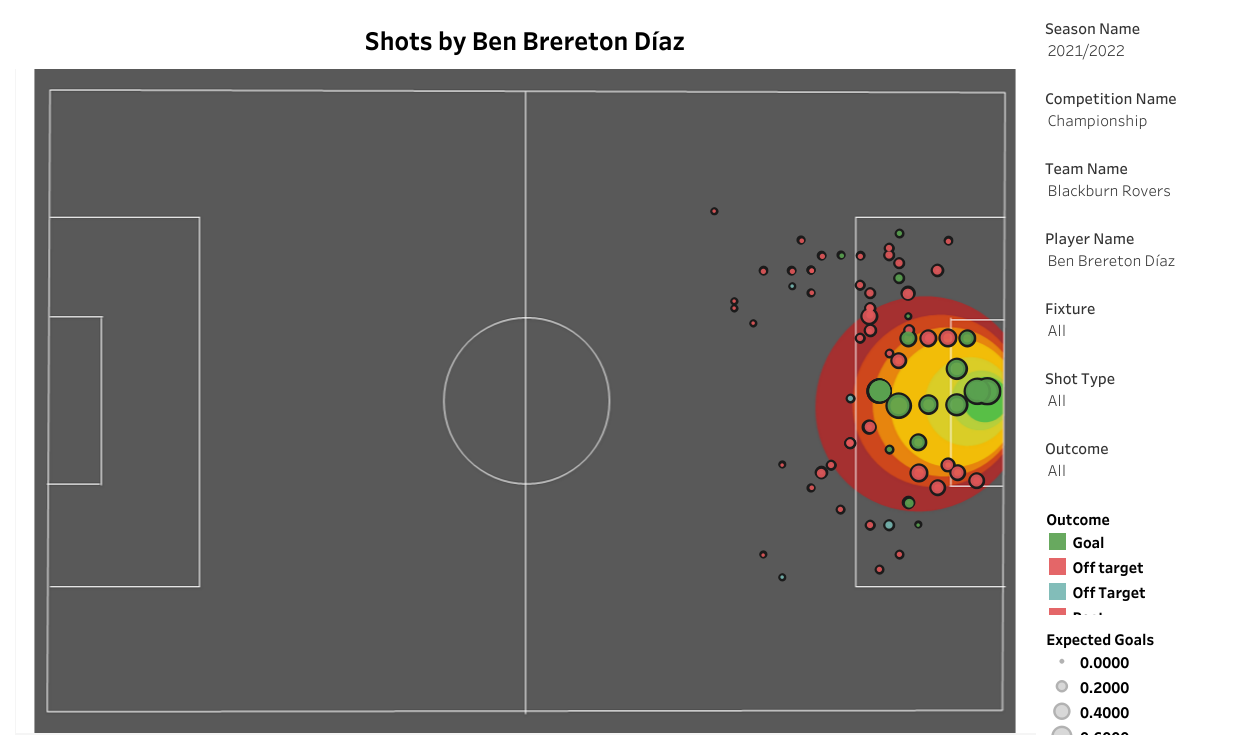 With Diaz usually being deployed on the left-hand side and not being a left-footed player, this leads to him usually cutting in onto his right foot. He will often hold his man in front of him, quickly shift the ball onto his right foot and quickly look to get a cross or shot off. As seen in the above visual, he has several shots from the left side of the pitch as that is his preferred side. He has scored almost all his goals from inside the penalty area and is a huge threat when he gets the ball in the final third.

Blackburn have reportedly placed a £20 million price tag onto their star player as they look to regain promotion to the top division for the first time since dropping out in 2010. Considering the striker has already chipped in with 20 goals to help Blackburn’s promotion push this season, Blackburn are extremely unlikely to let him leave any time soon. West Ham are still looking at some options, but if they have the chance, they will try and get the Chilean striker to London.