West Ham have shown interest in Nottingham Forest wonderkid Brennan Johnson. The 20-year-old has set the Championship on fire recently as Steve Cooper’s side have climbed up the table making a late promotion push and have also knocked out two Premier League sides in the FA Cup before going down to Liverpool in a closely fought game.

Brennan Johnson has been one of the young stars in the Championship who has experienced a tremendous rise in stature this season. The 20-year-old’s performances have been rewarded with a place in the Wales national team. Johnson is capable of playing as a striker, second striker, and on either flank. Hammers boss, David Moyes, often looks at the Championship to find great players, Jarrod Bowen and Said Benrahma are two such examples, and Johnson could be next in line to follow in their footsteps.

Johnson has netted 12 goals in all competitions for Forest and his potential Premier League standard quality shone through as they beat Arsenal and Leicester as well as coming close to defeating Liverpool in the FA Cup. The youngster also has seven caps for Wales and is set to be one of Wales’ most important players as they look to qualify for the 2022 World Cup this month. 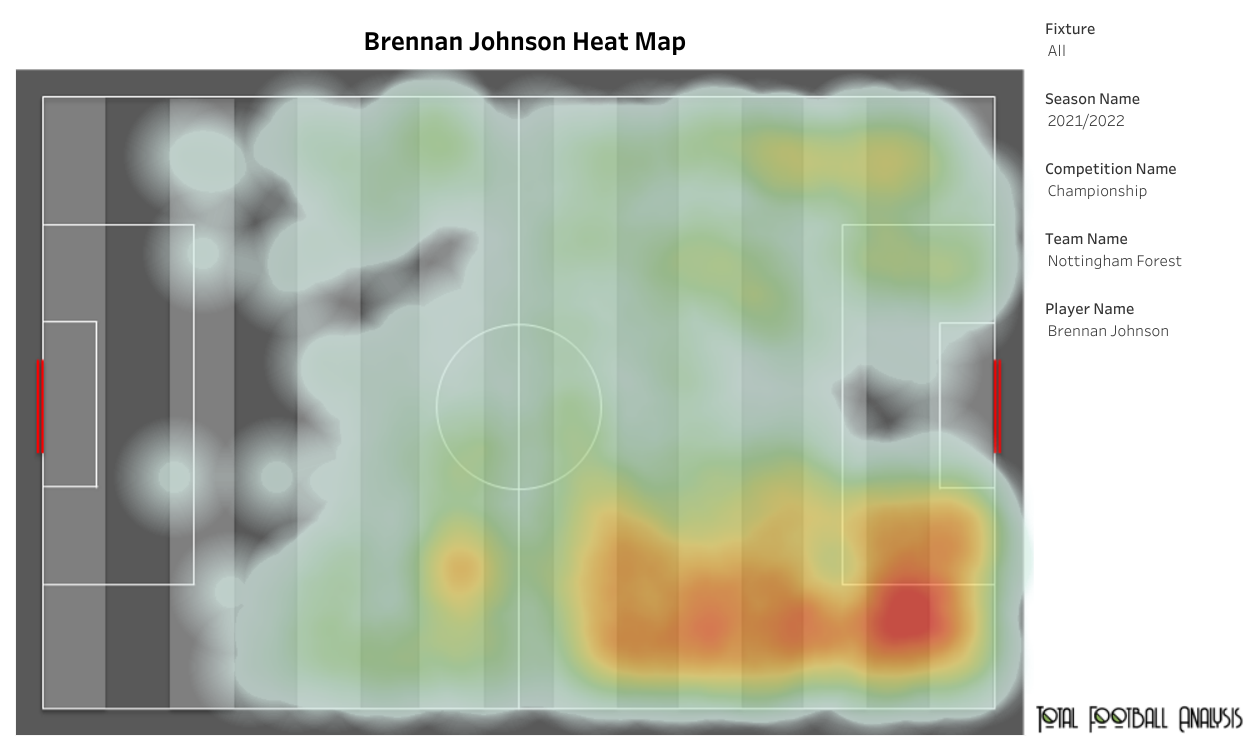 Johnson usually operates on the right flank, providing width to his team and trying to cut in from the right. But his technical ability allows him for tactical flexibility as he was deployed on the left, centre, and right of an attacking midfield three within a 4-2-3-1 formation. However, we generally have the idea that his preferred position is as an advanced attacking midfielder playing on the inside right. This allows him to utilize his right foot to put crosses into the box or take a crack on the goal. 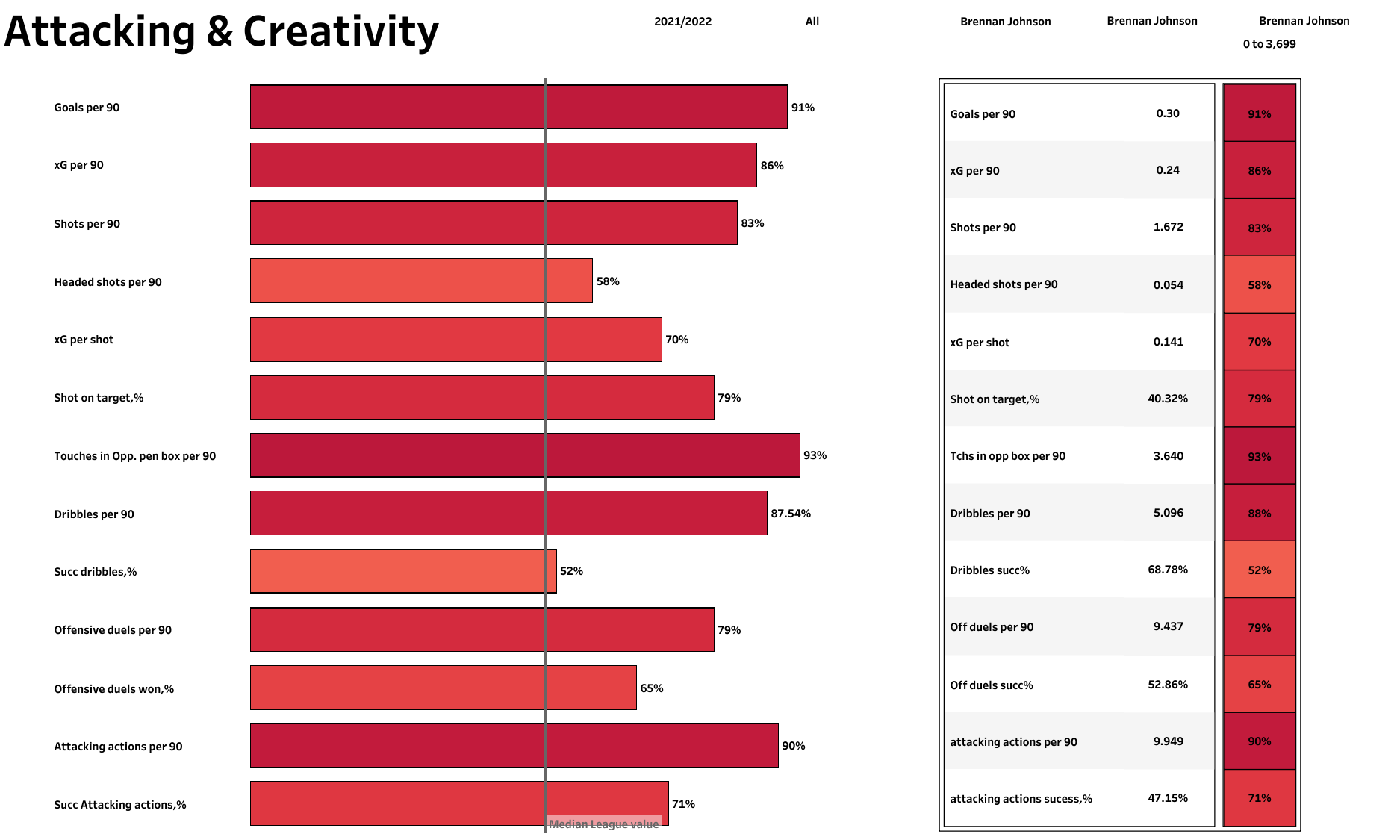 Johnson is blessed with blistering pace and can match the counterattacking style of play that David Moyes is used to. He has attempted 5.09 dribbles per 90 minutes and has been able to complete 68% of these dribbles. He has also won approximately 50% of his attacking actions and ranks in the 93rd percentile for the number of touches inside the opposition’s penalty area. 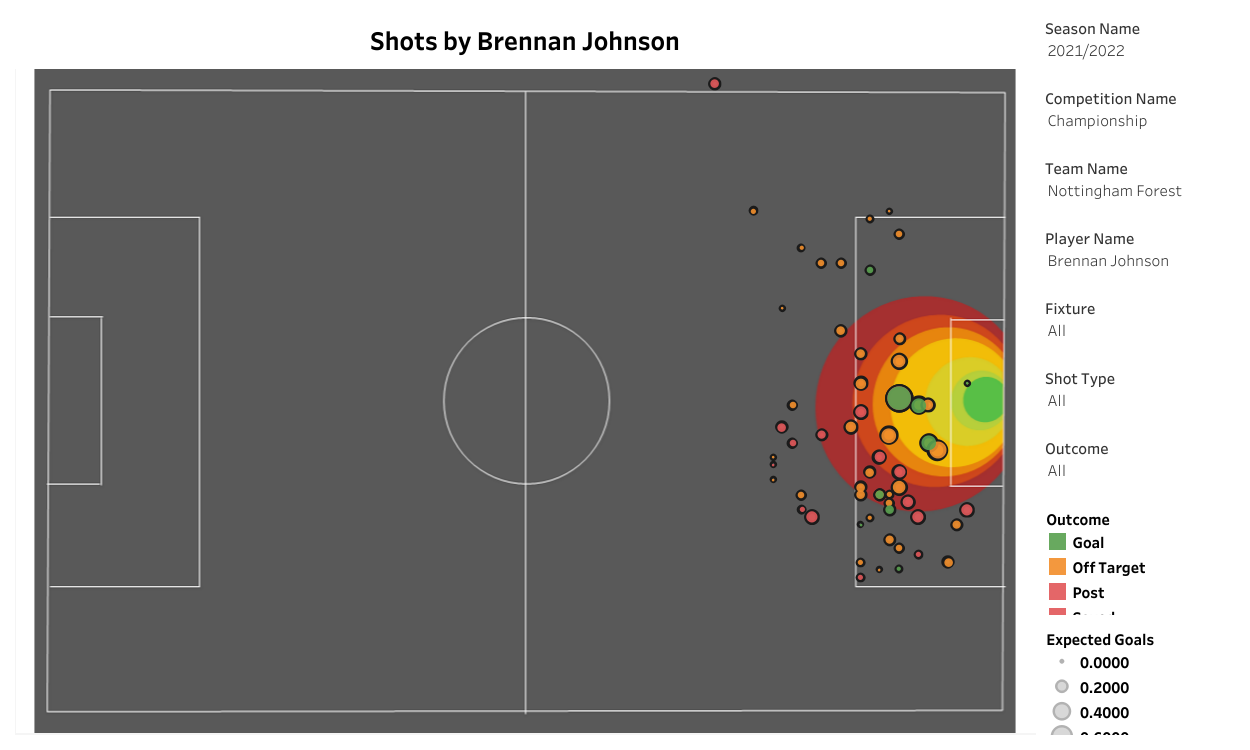 Brenna Johnson has attempted 62 shots on goal and has managed 25 shots on target. He has attempted 1.67 shots per 90 minutes, with 40.32% of these shots being on target. The above shot map indicates that Johnson is perfectly capable of attacking the opposition goal from wider areas as well as from central positions. Most of his shots have been attempted from the right as he is usually deployed on the right flank. But Johnson can also play as a second striker behind his number nine and is highly threatening from this position. 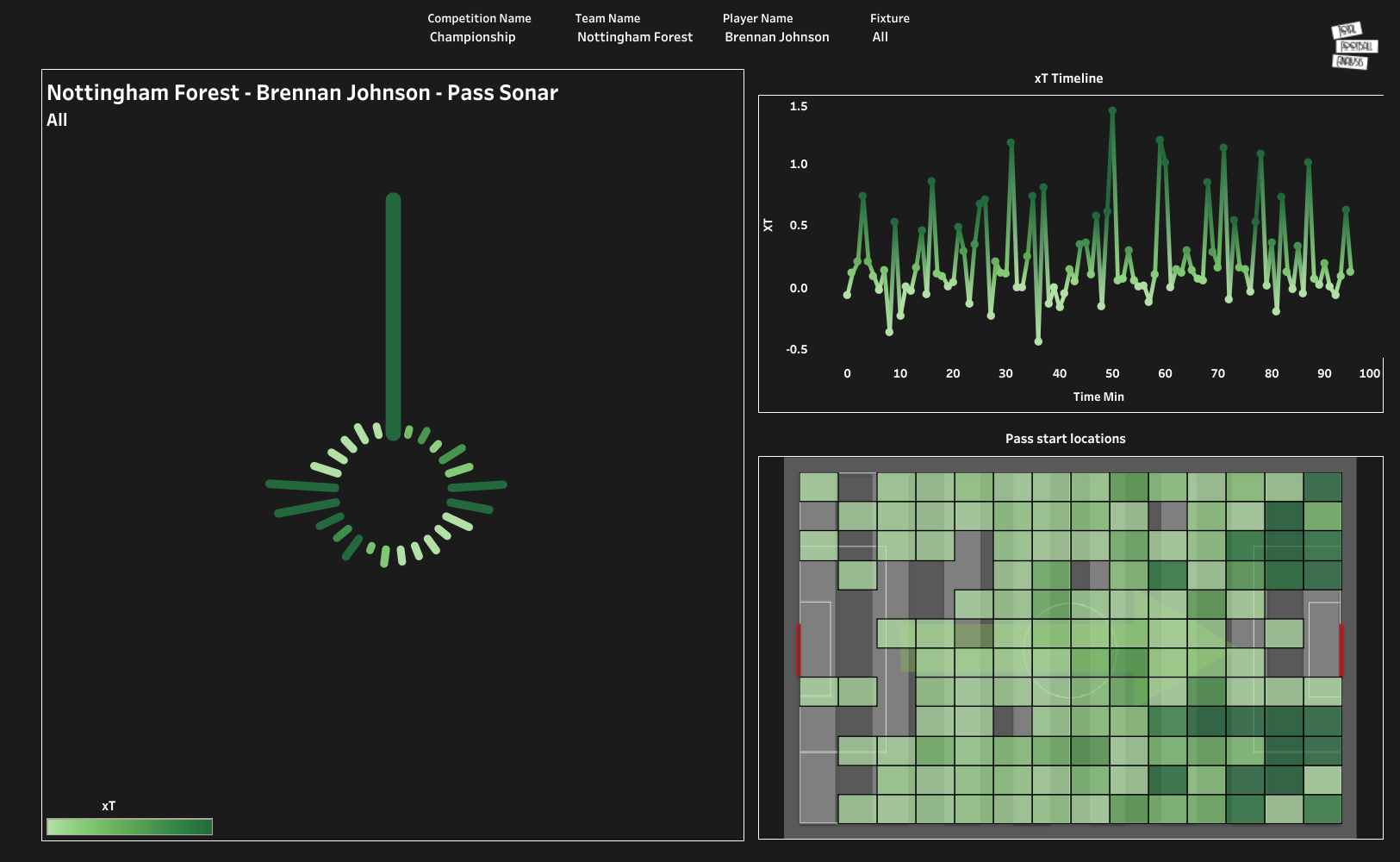 The xT timeline from the above visual indicates that he has generated a very high threat throughout the game and is a menace for the opposition defenders. The pass start locations tell us that he has generated a very high xT from the wider areas on both sides of the pitch and is very effective inside the final third. Johnson has also registered five assists to his name in the season so far.

Nottingham Forest have a great chance to finish in the top six of the EFL Championship to secure a playoff spot and Brennan Johnson will have a huge role to play in this. Several Premier League clubs have shown keen interest in the youngster, and West Ham United will have to act fast if they want to secure Johnson’s signature.