Everton are reportedly ready to offload English striker Dominic Calvert-Lewin in the summer if they can get a good price from suitors. West Ham United have been in the market for a good striker and are linked with a move for the 25-year-old English international.

West Ham United look at Calvert-Lewin to solve their striker problem and are also keen on signing a striker in the summer after they failed to add depth to their squad in the winter window. Currently, the only striker at David Moyes’ disposal is Michail Antonio, who seems to have lost his form, which started at the start of the season. The Jamaican has played almost every game for the Hammers and has not been given enough rest. The Jamaican international may not be able to endure another season as West Ham’s sole striker.

David Moyes had been initially keen on bringing in a deputy for Antonio, although that plan might now change to signing a bonafide starter. The 25-year-old did enjoy the best season of his career last term, notching 16 goals in 32 Premier League games – including a goal in the 1-0 win over West Ham at the London Stadium. Dominic Calvert-Lewin has failed to replicate his form of last season, as there has been a clear dip this term. After starting the campaign strongly, the English international suffered a toe injury that kept him out of many matches. 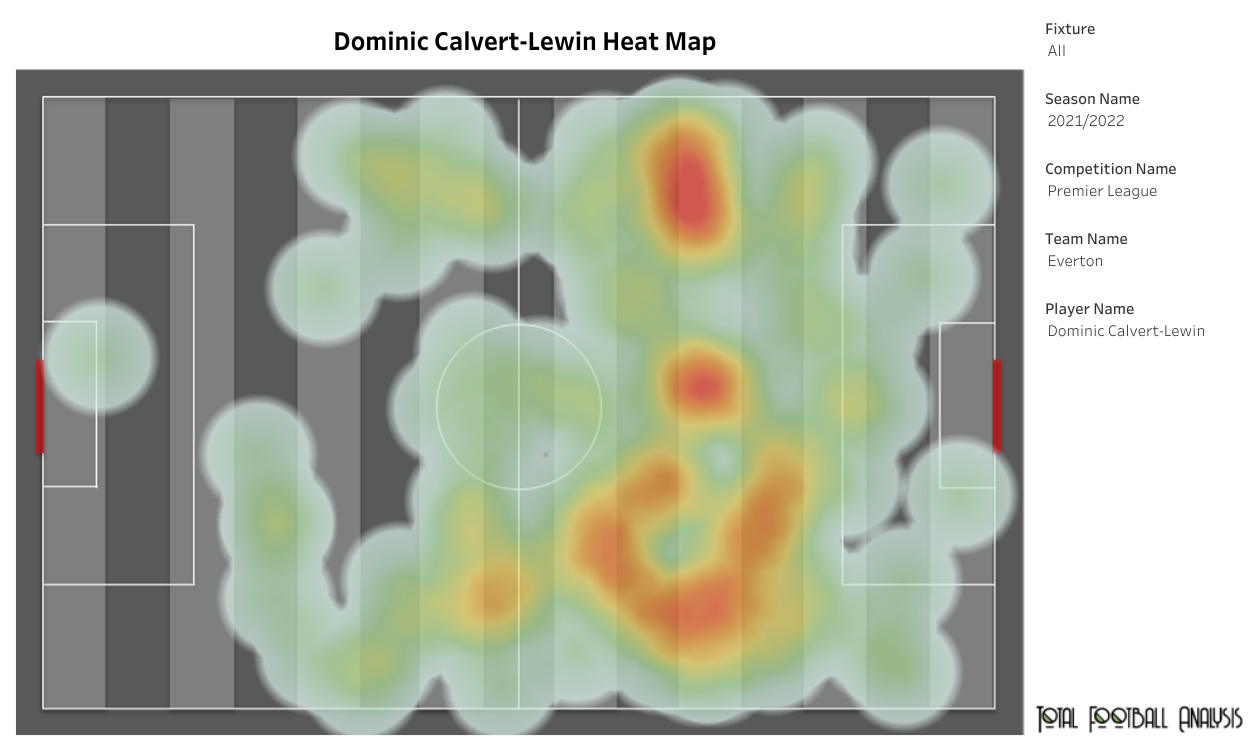 The above heat map displays the locations of the pitch where DCL has been the most active. We can see that he spends most of his time in front of the opposition box, while also drifting into the wider areas to stretch the opposition backline. In addition, we can get a sense of his defensive work rate as well. Calvert-Lewin is known to exploit the space behind the defenders, and his runs are often problematic for the opponents. His link-up play is also impressive, as he can hold up the ball and play a pass into the channels, bringing others into the play. 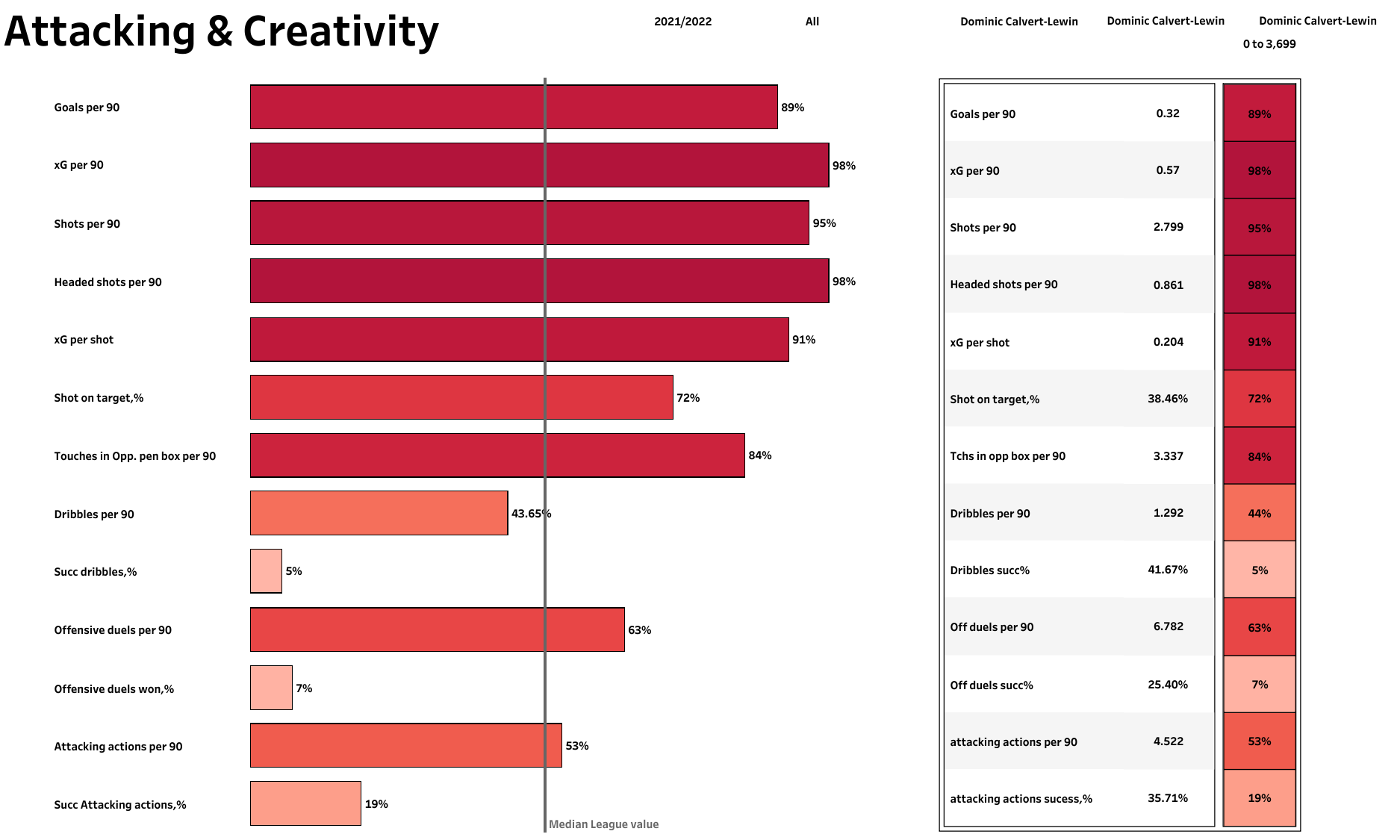 The above visual provides an overview of Calvert-Lewin’s attacking and creativity stats. Despite his fewer appearances this season, the striker has fared well in terms of the majority of the attacking & creativity stats. He has an xG of 0.57 per 90 minutes and has attempted 2.799 on average. His shot accuracy, average headed shots, and successful attacking actions have been impressive. Calvert-Lewin displays decent ball control, passing, and vision. His aerial ability is impressive, and he is strong in aerial duels. 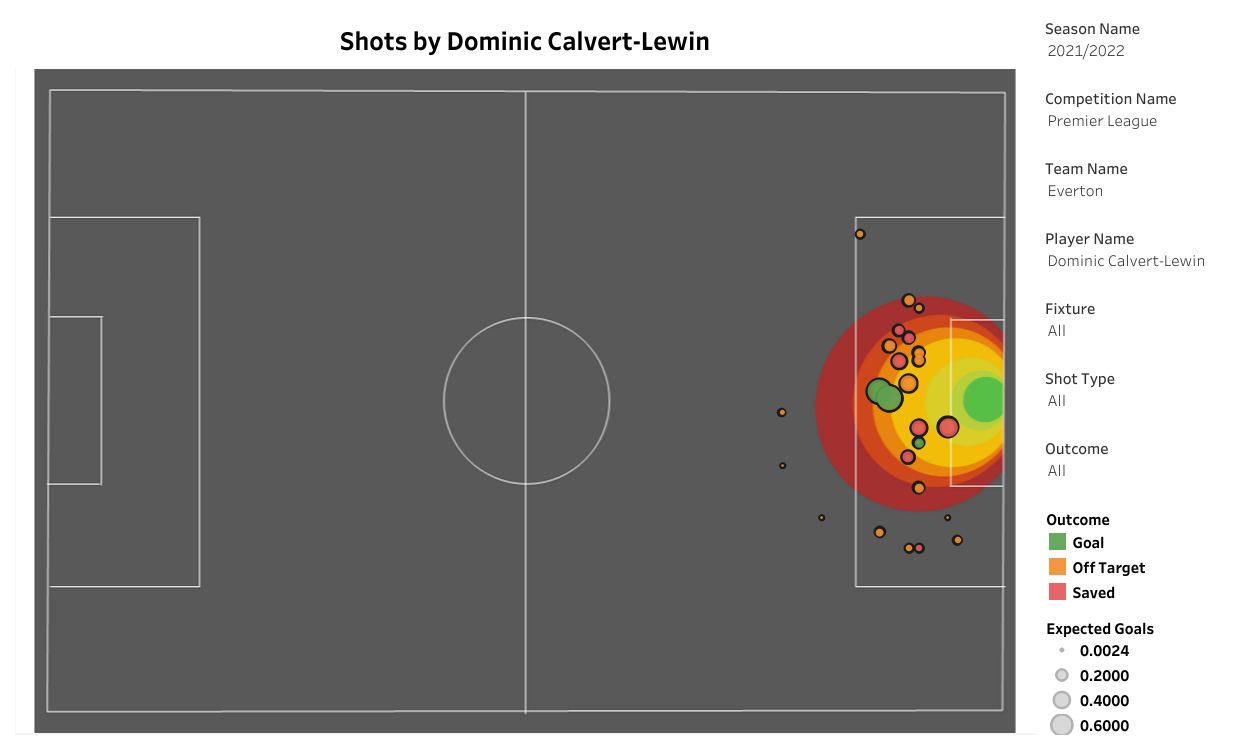 The above visual shows us the shots attempted by DCL in his 10 appearances in the Premier League. He has a ‘shot on target’ percentage of 40%. As seen in the visual, most of his shots are attempted from positions inside the penalty area and around the penalty spot. So far, he has scored three goals, all from inside the box.

It goes without saying that West Ham must sign at least one striker in the summer. Moyes has tried and failed to bring in a new forward for three windows since selling Sebastien Haller to Ajax in January last year. Dominic Calvert-Lewin would be a brilliant addition to Moyes’ squad at the London Stadium.