West Ham United are set to play Sevilla at the London Stadium on Thursday in the second leg of the Round-of-16 in the UEFA Europa League.

West Ham United come into this game on the back of a 2-1 win over Steven Gerrard’s Aston Villa in the English Premier League. Second-half goals from Ukrainian winger Andriy Yarmolenko and Spanish midfielder Pablo Fornals sealed the deal for David Moyes’ West Ham United. The young midfielder, Jacob Ramsey, scored the consolation goal for Aston Villa. Sevilla, on the other hand, drew 1-1 against Rayo Vallecano in LaLiga. A goal from former Manchester United forward Bebe for Rayo Vallecano was canceled out by a goal from Danish midfielder Thomas Delaney for Sevilla.

The Hammers have done extraordinarily well to reach this stage of the competition. However, they are starting to feel the pressure, especially against a Sevilla side, who are widely considered the most competent Europa League team over the past decade.

David Moyes was handed a significant boost as Aaron Cresswell was declared fit for the Europa League clash against Sevilla after the defender went off in the clash against Aston Villa. West Ham have done well with Dawson and Zouma as their centre-back pairing recently. 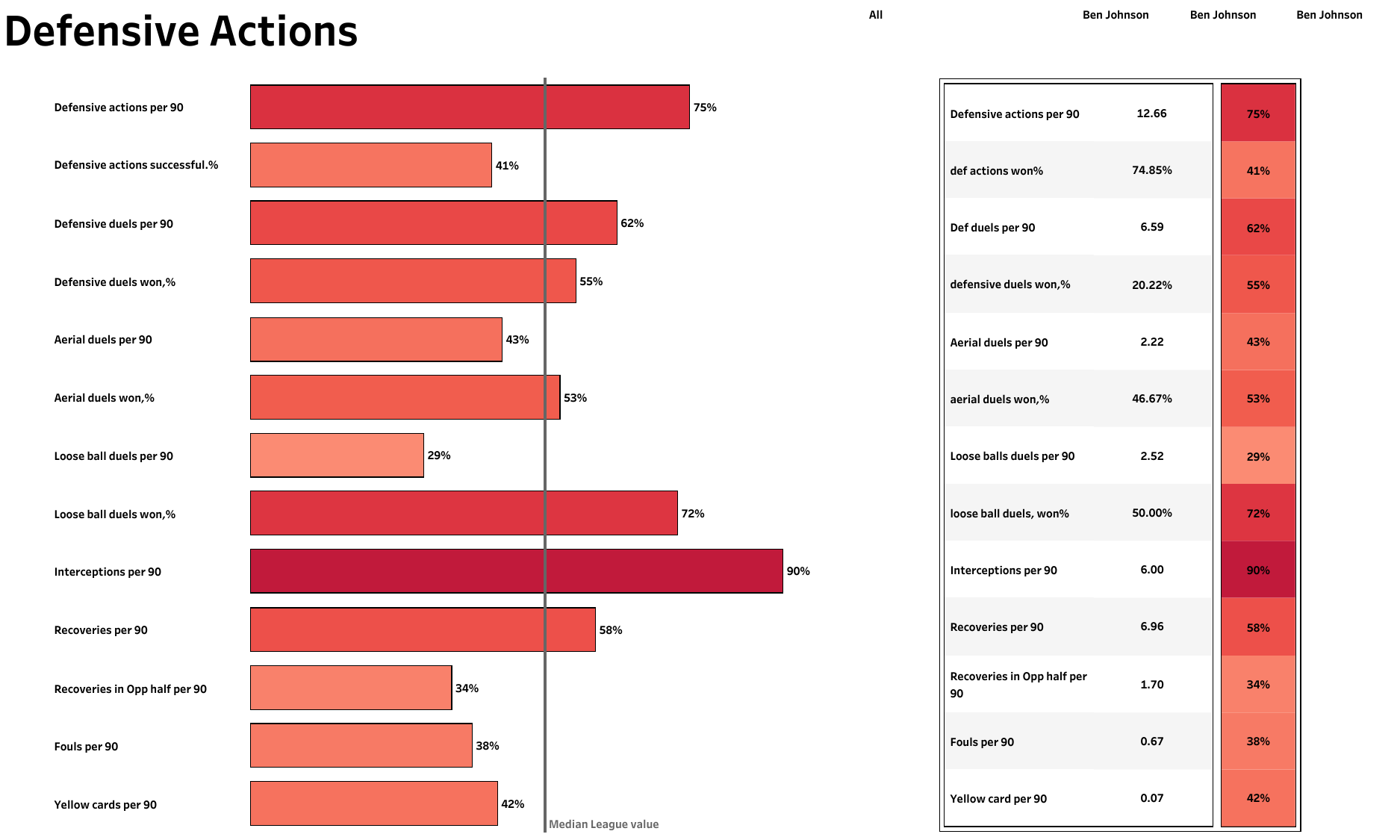 Ben Johnson has been starting over Coufal due to lack of match fitness. Johnson put up brilliant performances and showed the potential of being the first choice right-back for his manager in the coming time. Johnson has attempted 12.66 defensive actions per 90 minutes and has won 74.85% of these actions. He has the highest success rate in winning loose ball duels as he has won 50% of the loose ball duels he has attempted.

Soucek and Rice have been the go-to pair for Moyes in the midfield, and the double pivot of the two midfielders has helped West Ham throughout the season. Rice had a brilliant game against Aston Villa as he controlled the tempo of the game and also made a great run for the second goal, which turned out to be the match-winner. Soucek is important to West Ham United in set-piece situations and can also work tirelessly in the midfield to win back the ball for his team. 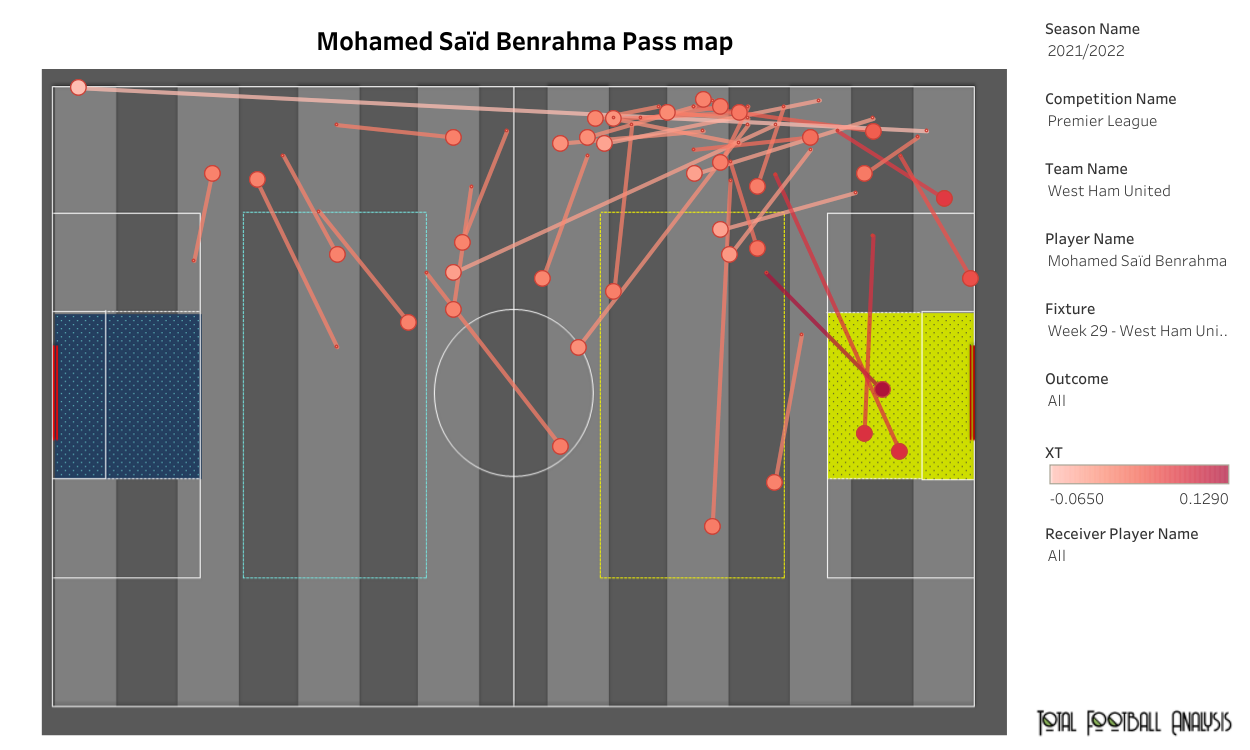 While many West Ham attackers struggled for form, Benrahma performed well against Aston Villa on the weekend. The Algerian was lively throughout the game and put in two assists for his teammates. He was a lively presence, constantly looking to receive and move West Ham into dangerous areas. The above visual shows us the pass map for Benrahma. He played on the left flank for West Ham and generated an xT of 0.46 from his passes and 0.057 from the dribbles he attempted. The pass map shows us the passes that generated the highest xT in dark red.

The return of Antonio, West Ham’s only senior striker, would be a welcome boost, given that Jarrod Bowen has not recovered in time, with the 25-year-old also likely to miss out on Sunday’s trip to top-four rivals Tottenham. Andriy Yarmolenko stepped up in place of Antonio following his injury against Villa, with the Ukraine international scoring an emotional opener upon his return to the side, though the 32-year-old is far from 100 percent ready for first-team action. 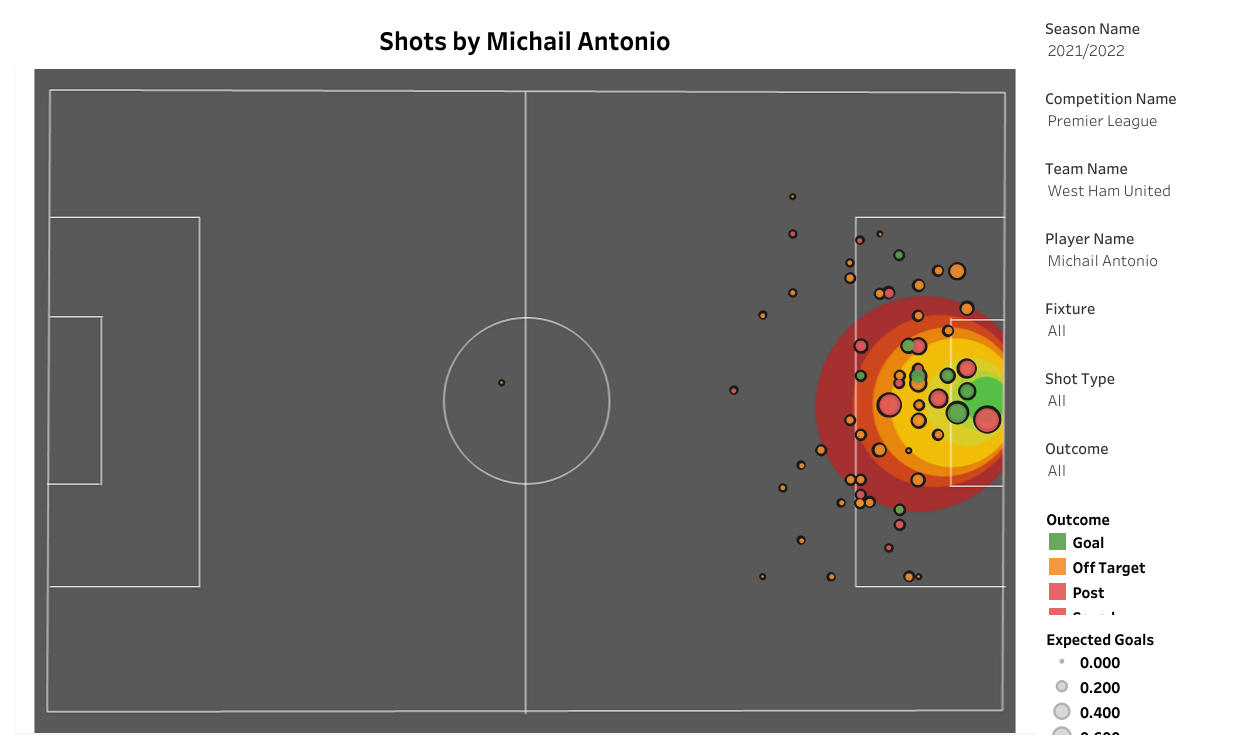 Antonio has been West Ham’s leading man this season and was in brilliant form at the start of the season. Antionio has not been firing in the recent games for West Ham and has seen a dip in his form. However, he is the only striker David Moyes has, and they have to rely on him for the goal. The above shot map indicates how lethal Antionio is in the penalty area as most of his shots in the box are on target, and he can be very effective when he gets the ball in these areas.

West Ham have a lot of work to do in the second leg and have to capitalize on the chances they create. Moyes’s side will have to do something no other English team has ever managed in this competition – beat Sevilla.