West Ham got the new year off to a flying start with a 3-2 victory over Crystal Palace. Despite a nervous second half, the first 45 minutes was a great performance. Manuel Lanzini was at the heart of it once again in a London derby, scoring a beautiful goal and then converting a penalty that put David Moyes’ side up 3-0 at halftime.

After injury issues and spending much time out of the side, it’s great to see Lanzini perform consistently again. West Ham midfielder Manuel Lanzini is performing to his best and is back in the starting lineup again after a long spell out the team.

The Argentinian was signed by former West Ham boss Slaven Bilic for around £10 million after a successful loan at the club in 2015-16. He was fantastic in his first few years becoming a fan’s favorite. However, while training with the Argentinian national team ahead of the FIFA World Cup in 2018, Lanzini ruptured his cruciate ligament. He was out for nearly a year, and when he came back, he just wasn’t the same. Since that injury, he has played for West Ham just over 50 times throughout the three seasons. Last season he earned 21 starts in all competitions, scoring once and assisting his teammates once. There was a lot of speculation on whether or not he would stay going into the 2021-22 campaign, but he’s still here and playing well for the Hammers. 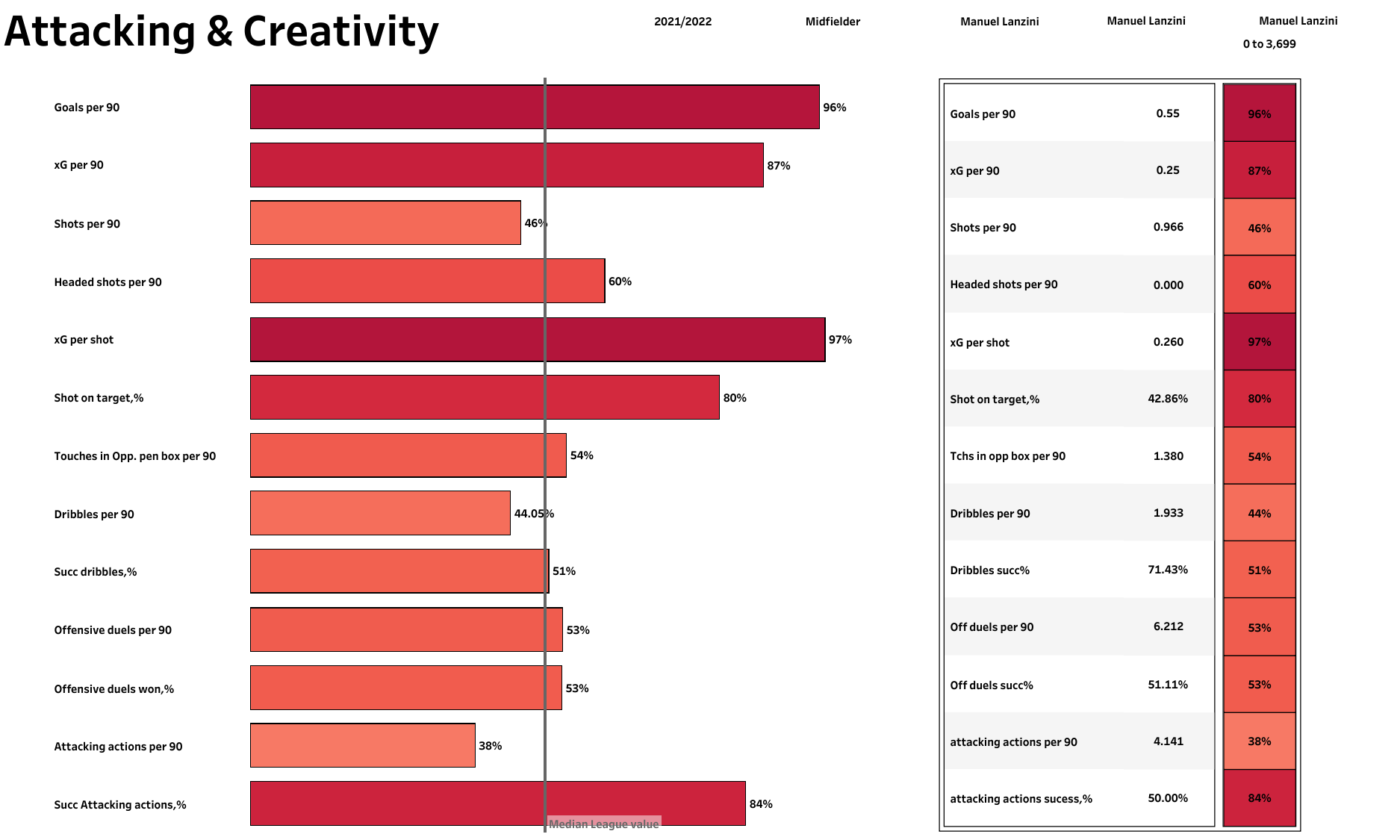 Lanzini has five goal contributions so far in the Premier League, which includes four goals and an assist. His attacking metrics indicate that he had an xG of 0.25 per 90 minutes and also has a high xG per shot. Lanzini has had 43% of his shots on target and has the technique and skill to score goals from long-range as well as dead-ball situations. So far, he has completed 50% of the total attacking actions he has attempted.

He was lively off the bench several times in cup matches, fighting for his place in the starting XI, and rightly got his chance in the victory over Chelsea. He was outstanding, as were West Ham. The 28-year-old is a skillful and elegant player, with an eye for a spectacular goal and pass, as shown versus Crystal Palace. The touch, technique, and finish were sublime as the Hammers doubled their lead with a typical Lanzini goal. 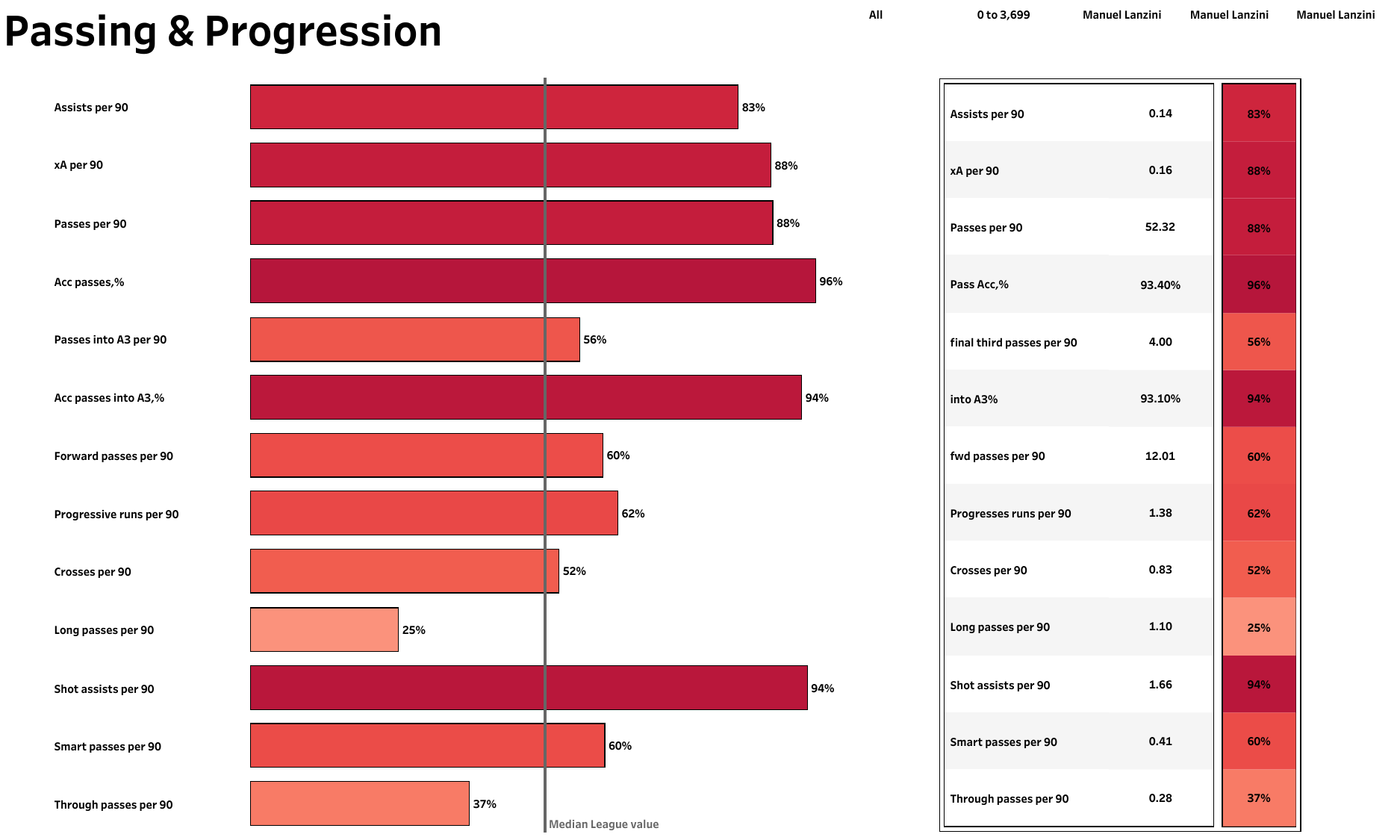 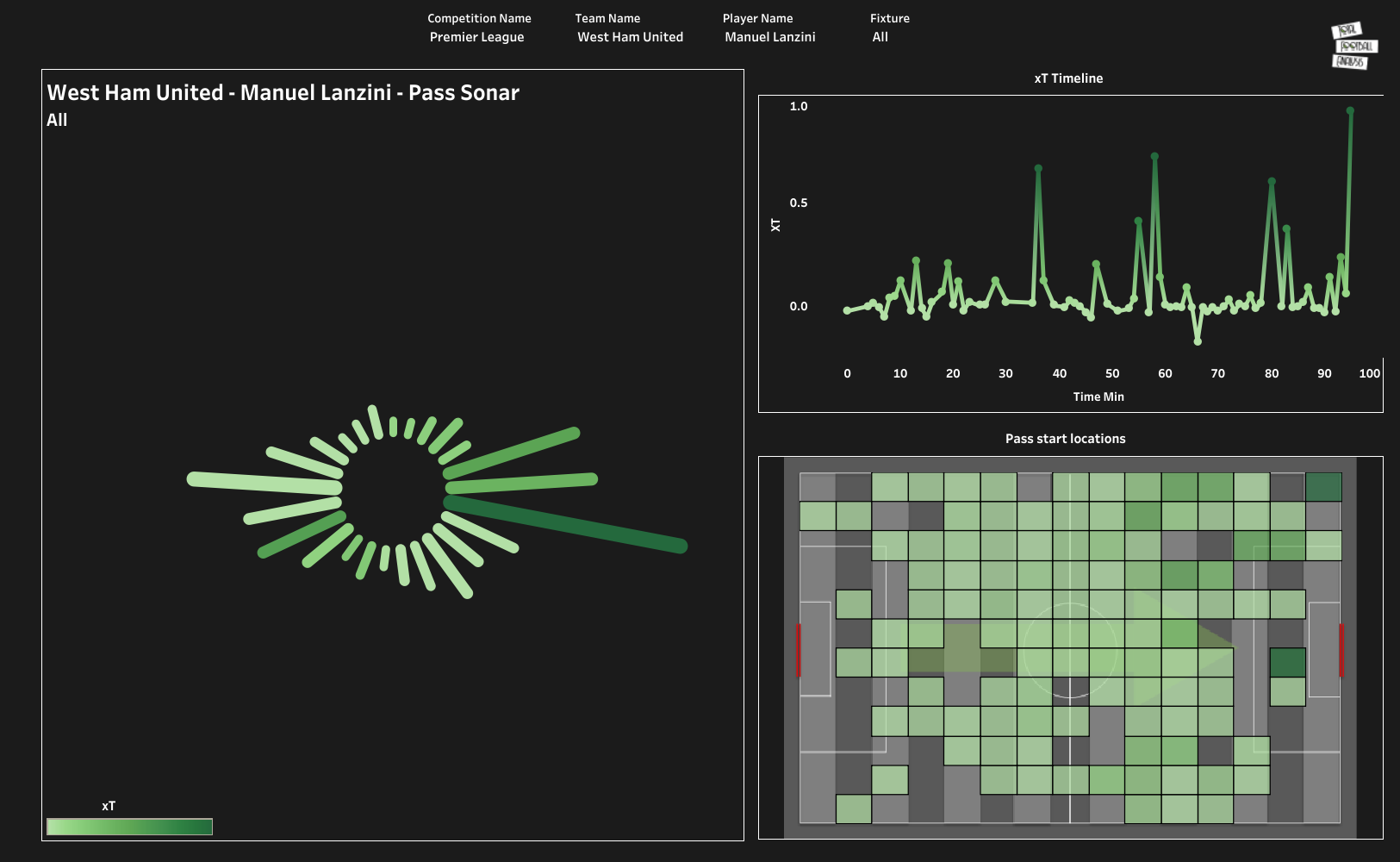 The above visual shows us the pass sonar for Lanzini. It also indicates the pass start locations and the xT these passes have generated. From the visual, we can see that the passes that Lanzini plays towards his right have generated a high xT. The pass start locations indicate that he has played several passes from deeper positions on the field and has also played many key passes into the penalty area. The xT timeline indicates that he has an average xT of above 0.5, and is a constant threat throughout the game, and has a higher xT towards the end of the game. 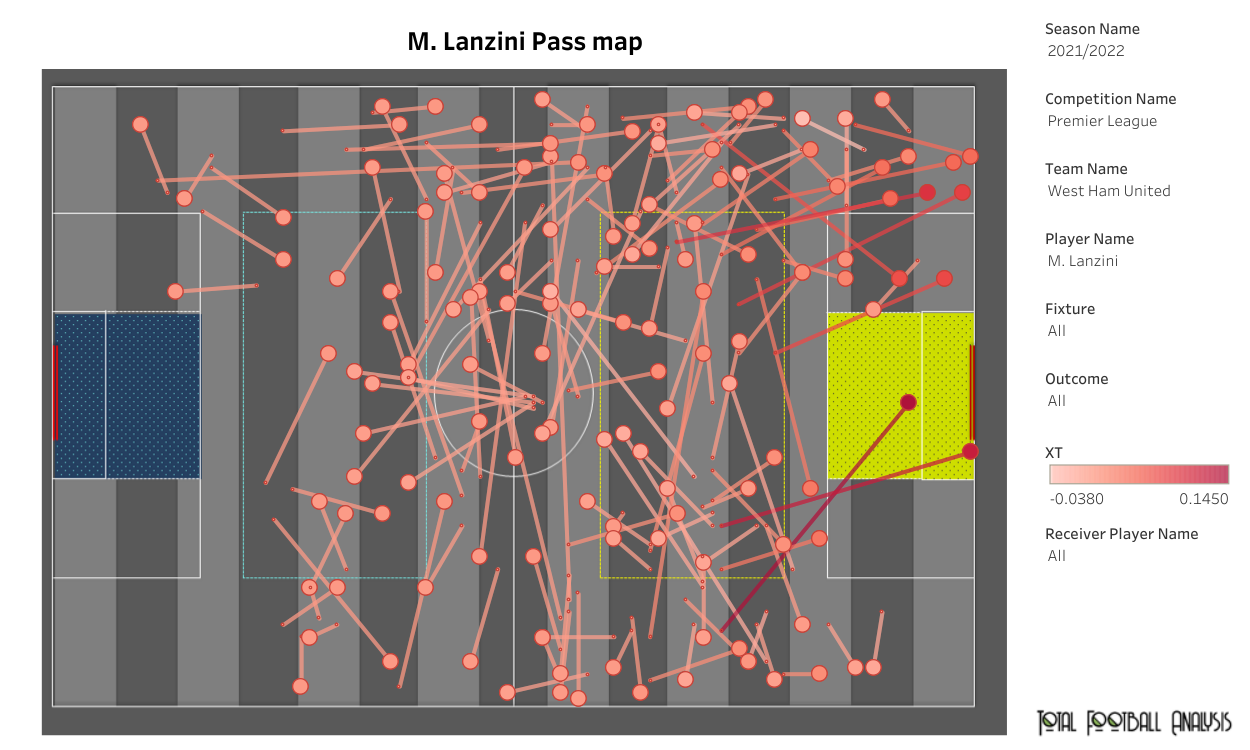 The above visual shows us the pass map for Lanzini from his last three games for West Ham. The visual indicates that Lanzini has played many passes throughout different positions on the field, which tells us that he plays a free role in front of the midfield duo of Soucek and Rice. Lanzini has great vision and can provide great balls into the penalty area for his strikers. Most of the passes that he has played into the final third have generated a high xT.

Notably, he is also working so much harder off the ball than ever before and is no longer a player only useful when his team has the possession. Last season, when Declan Rice was out, he was even used as a deep-lying midfield player. He has the trust of Moyes, who is getting the best from him. With the presence of Rice and Soucek in the midfield, it’s improbable that we see him playing in a deeper role. But that experience can help him adapt well for playing higher as well.

Under Manuel Pellegrini, Lanzini scored just one Premier League goal and was used rarely last season by Moyes despite his famous goal in the 3-3 draw to Spurs. But now Lanzini is back to his best when West Ham need him with Said Benrahma heading to the AFCON. The former Argentinian international is in top form currently, and if he keeps it up, he will be hard to bench.

We use cookies to ensure that we give you the best experience on our website. If you continue to use this site we will assume that you are happy with it.Ok