West Ham United finally signed an attacker after acquiring the young Italian striker, Gianluca Scamacca, for a €36 million fee from the Serie A team, US Sassuolo. The Hammers beat the likes of Arsenal and Paris Saint Germain in the race to buy him. The signature of Scamacca means Michail Antonio will certainly play a different role at the London Stadium in the upcoming season. In previous years, the Jamaican man showed his versatility to play on both the wings as well as a right wing-back. And it looks like he would be returning to the wings this season. 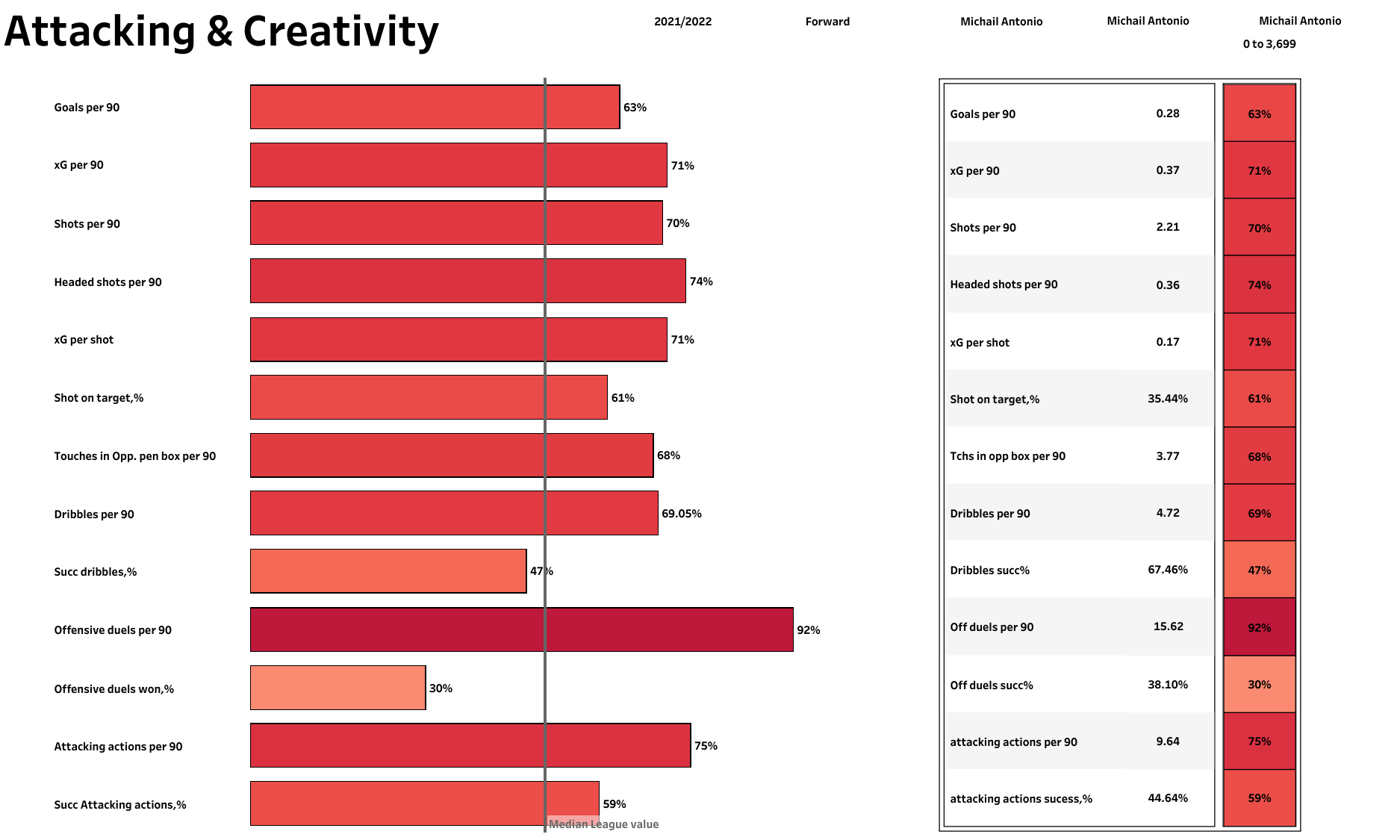 Antonio made 47 appearances across all competitions for West Ham United last season, including 36 in the Premier League. He played for 2,979 minutes in the league where he scored 10 goals at a rate of 0.28 per 90. This was lower than the 0.37 that xG per 90 estimated. He took 2.2 shots per 90 and hit a fairly respectable 35.4% of these attempts on target. He generated 3.77 touches in the opponents’ penalty area per 90 and completed approximately 3.2 dribbles per 90. The Jamaican man contested more than 15.6 offensive duels per 90 and was involved in 9.64 attacking actions per 90. 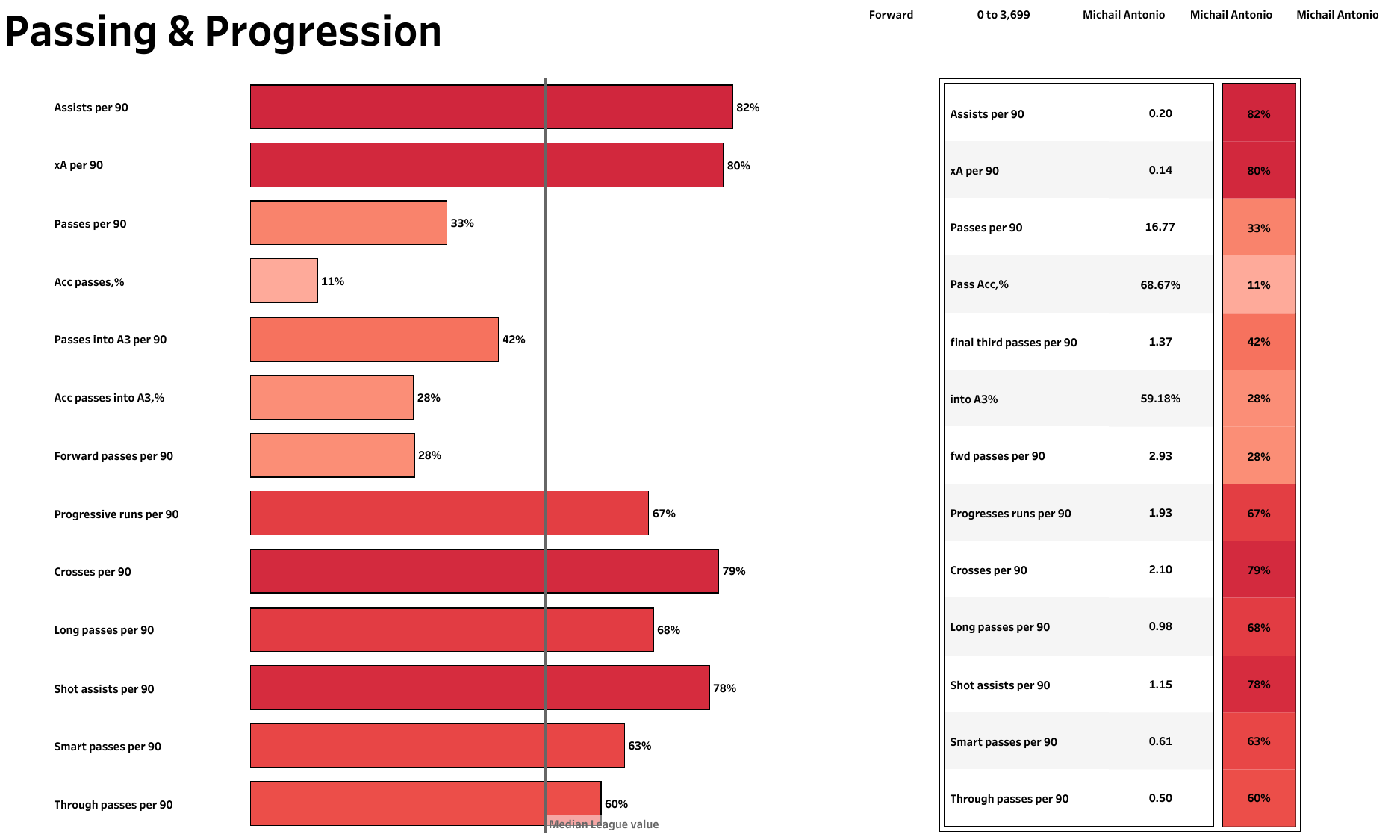 In addition to his 10 goals, Antonio provided eight assists for David Moyes’s side, meaning he was involved in a goal every 165.5 minutes. His rate of assists per 90 was 0.2, slightly higher than the xA value of 0.14 per 90. He was mostly a passenger in the build-up play as he completed only 11.54 passes per 90 at a woefully low pass accuracy of 68.7%. He made 1.93 progressive runs per 90, good enough for the upper third among forwards. Also good enough for the top third were his long balls as he completed 0.98 of them per 90 minutes. With 2.1 crosses per 90 and 1.15 shot assists per 90, the Jamaican was placed in the upper quartile. 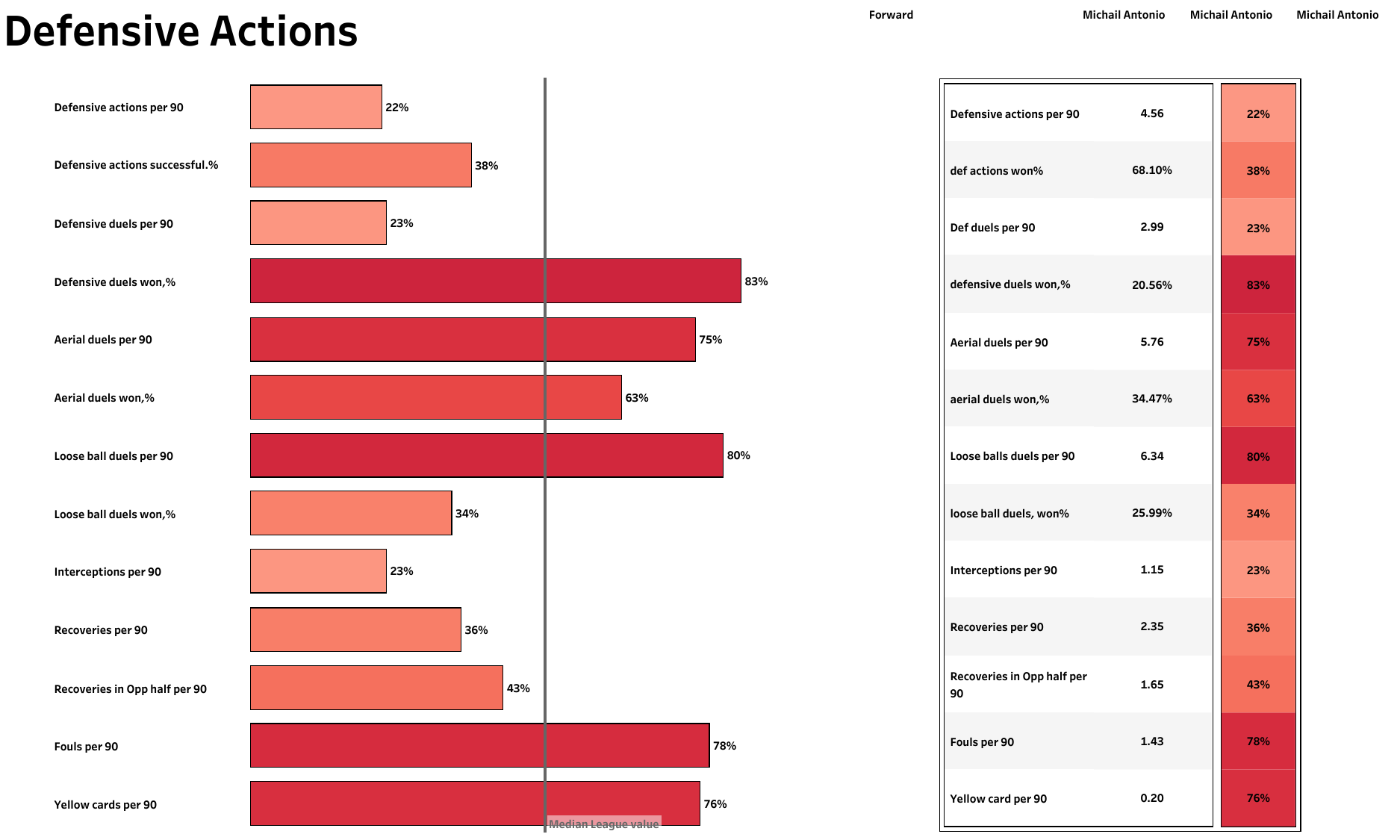 Antonio put in a better defensive shift compared to the majority of the attackers. He attempted just above four and a half defensive actions per 90. The Jamaican man won 20.56% of his defensive duels, good enough for the upper 17%. Despite being shorter than most centre-backs, he competed in 5.76 aerial battles per 90 and won a respectable 34.47% of them. He participated in more than six loose ball duels per 90. His one area of concern was his rashness and/or lack of temperament, as he committed 1.43 fouls per 90, received six yellow cards and was sent off once. 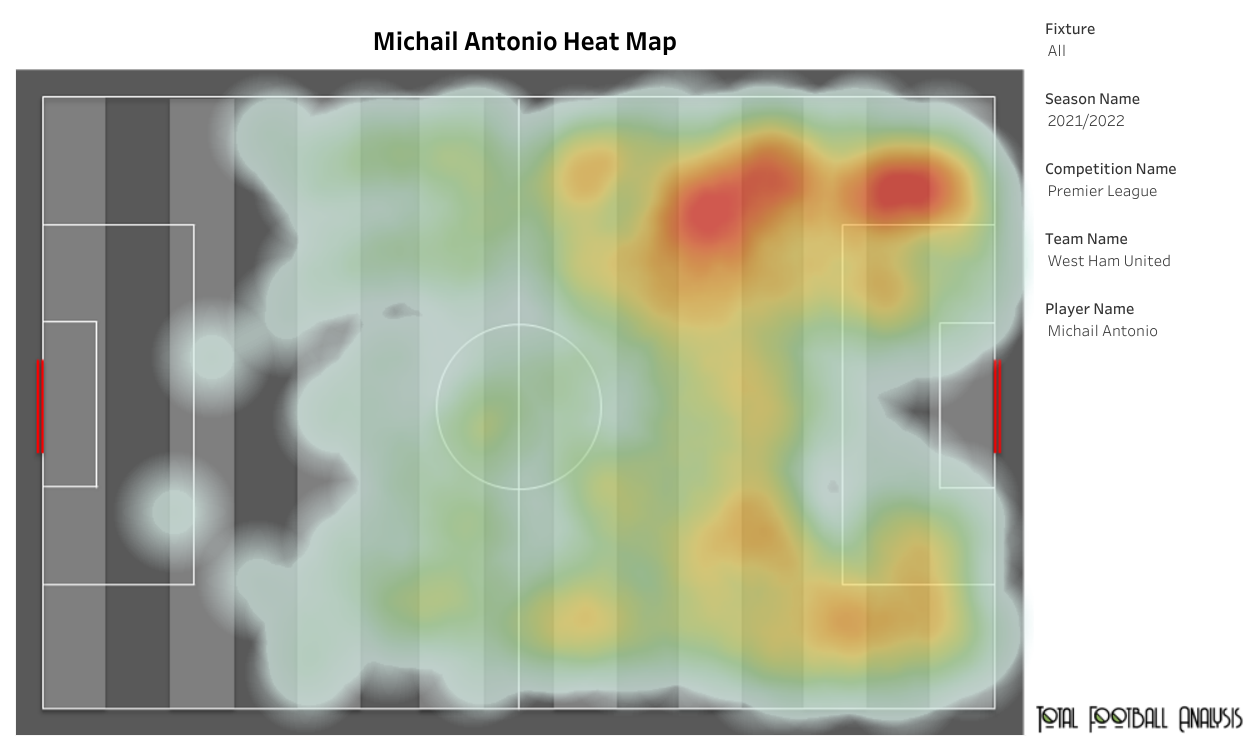 Despite being a striker last season, Antonio was predominantly involved on the left wing, normally cutting and drifting inside to generate scoring opportunities for himself and his teammates. He attempted 83 shots and hit 27 on target. He created 1.39 key passes per 90, nearly one pass into the attacking penalty area per 90, 4.03 progressive carries per 90 and almost one carry into the penalty box per 90. Additionally, he received eight progressive passes per 90 minutes from his teammates. On the defensive end, he attempted 14 pressures per 90 and 1.27 tackles & interceptions per 90.

With the arrival of Gianluca Scamacca, a towering striker at 195 cm who scored 16 goals last season in the Serie A, Michail Antonio looks likely to return to the role of a winger this season. While he will continue to score goals, the Jamaican will also be tasked with delivering crosses into the box for Scamacca to win headers.