Nikola Vlasic joined the Hammers from CSKA Moscow on transfer deadline day in the summer for around £25 million. Vlasic has had a slow start at West Ham, with David Moyes choosing to ease the Croatian into his first season in England.

His West Ham career has got off to a slow start, but there are signs Nikola Vlasic is improving. Vlasic was impressive in the Carabao Cup defeat to Spurs and the 2-0 FA Cup win against Leeds United. TThe Croatian was a threat throughout and created several chances for his team. He is getting better at a vital time because the Hammers need him at his best over the next few months. The 24-year-old’s minutes have been limited, he has made 19 appearances in all competitions, many being off the bench. However, after the promising performance against Spurs and Leeds United, we can expect him to play a lot more.

Said Benrahma struggled for form in the last couple of months and has departed for the African Cup of Nations. West Ham need Vlasic more than ever. Vlasic has long been expected to step in for Benrahma on the left flank while the Algerian is away at the Africa Cup of Nations. 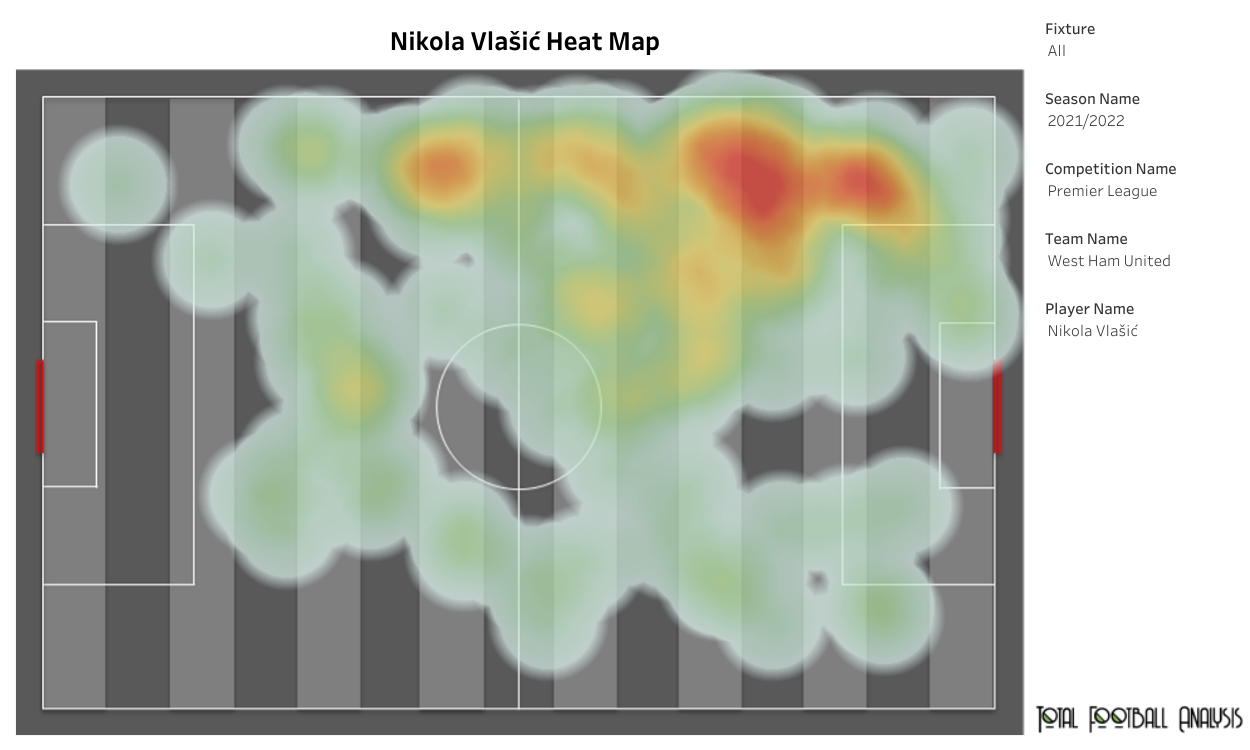 The above visual shows us the heatmap for Vlasic from the 2021-22 season of the Premier League. The heatmap indicates that Vlasic has primarily started on his favored left-hand side. Vlasic is comfortable playing as an attacking midfielder and can also play on the right side if needed. He is most threatening when he plays on the left flank as he can cut in and take a shot on goal or put in great crosses into the penalty area. Vlasic works hard out of possession, and on the ball, he provides the creativity and energy West Ham have needed in recent matches. 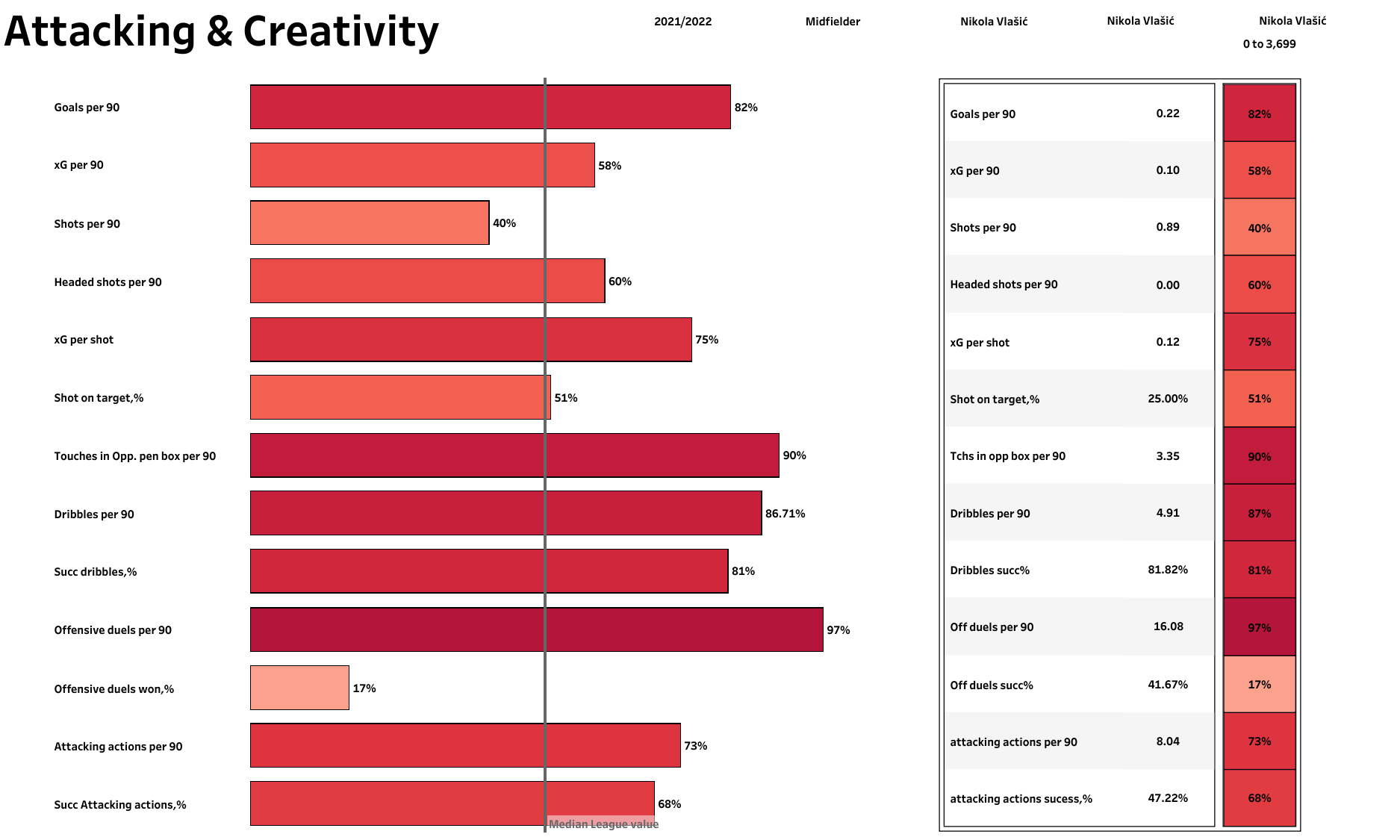 The above visual shows us the attacking and creativity stats for Vlasic. The stats indicate that Vlasic has attempted 8.04 attacking actions per 90 minutes and has completed 47.22% of these actions. He ranks highly for the number of offensive duels attempted per 90 minutes as he has attempted 16.08 duels on average and has completed 41% of them. The metrics indicate that most of his stats are significantly higher than the median league value. Vlasic has 3.35 touches in the opposition’s penalty area as he gets into threatening positions to receive the ball. Although the Croatian has not attempted many shots on goal, he has kept 25% of his shots on target. 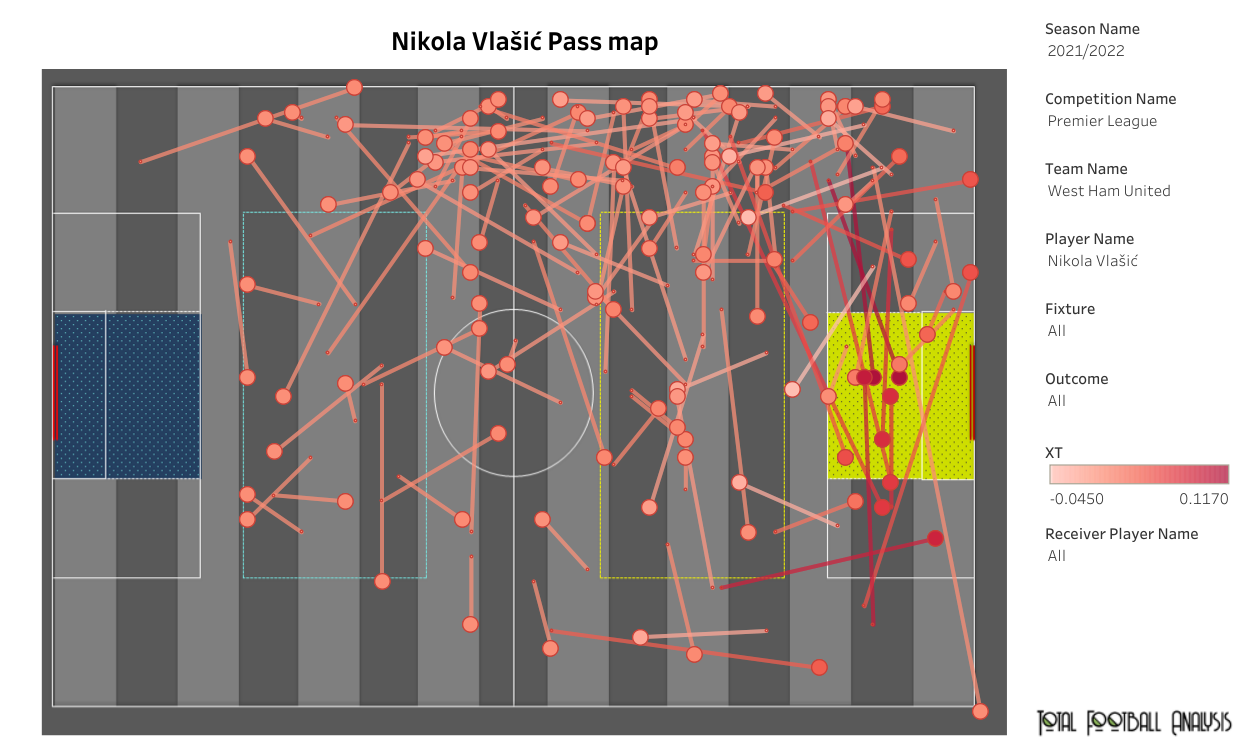 The above visual shows us the pass map for Vlasic. From the visual, we can see that as Diaz plays on the left flank, most of his passes are towards his right, and these passes have generated a high xT. The pass map indicates that he can get into threatening positions in wider areas and can put great crosses into the penalty area. Vlasic has excellent dribbling abilities, has great control of the ball, and can take it away from defenders in an instant to get into threatening positions. Playing as an inverted winger on the left flank, he can either cross the ball into the penalty area or can cut inside to his right to take a shot on the goal.

With West Ham wanting a centre-back and striker as priorities, a move for Jesse Lingard may not be made. Lingard would only further restrict Vlasic’s development and game time. Currently, Vlasic needs more game time so he can boost his confidence and start playing at the level he was before coming to West Ham.

Vlasic has the chance to make a name for himself at West Ham, and he has the potential to do so. There are chances that Benrahma might return to West Ham earlier than expected as his team is about to face a shock exit from the AFCON. Vlasic has got a run in the team and plenty of opportunities to impress his manager. If he performs well in the upcoming games, he can even fight for a regular starting spot in the XI over the likes of Benrahma and Fornals.