West Ham United will be bidding to make it four Premier League victories in a row when they welcome Leeds United to London Stadium on Sunday. The Hammers are currently fourth in the table, boasting 37 points from their 21 league matches this season, while Leeds have picked up 19 points from as many matches to sit down in 16th position.

A run of just one win from seven Premier League matches in November and December threatened West Ham’s top-four challenge, with the Hammers struggling for results. However, David Moyes’s side have responded excellently, winning each of their last three in the league against Watford, Crystal Palace, and Norwich City to move into the fourth position in the table. 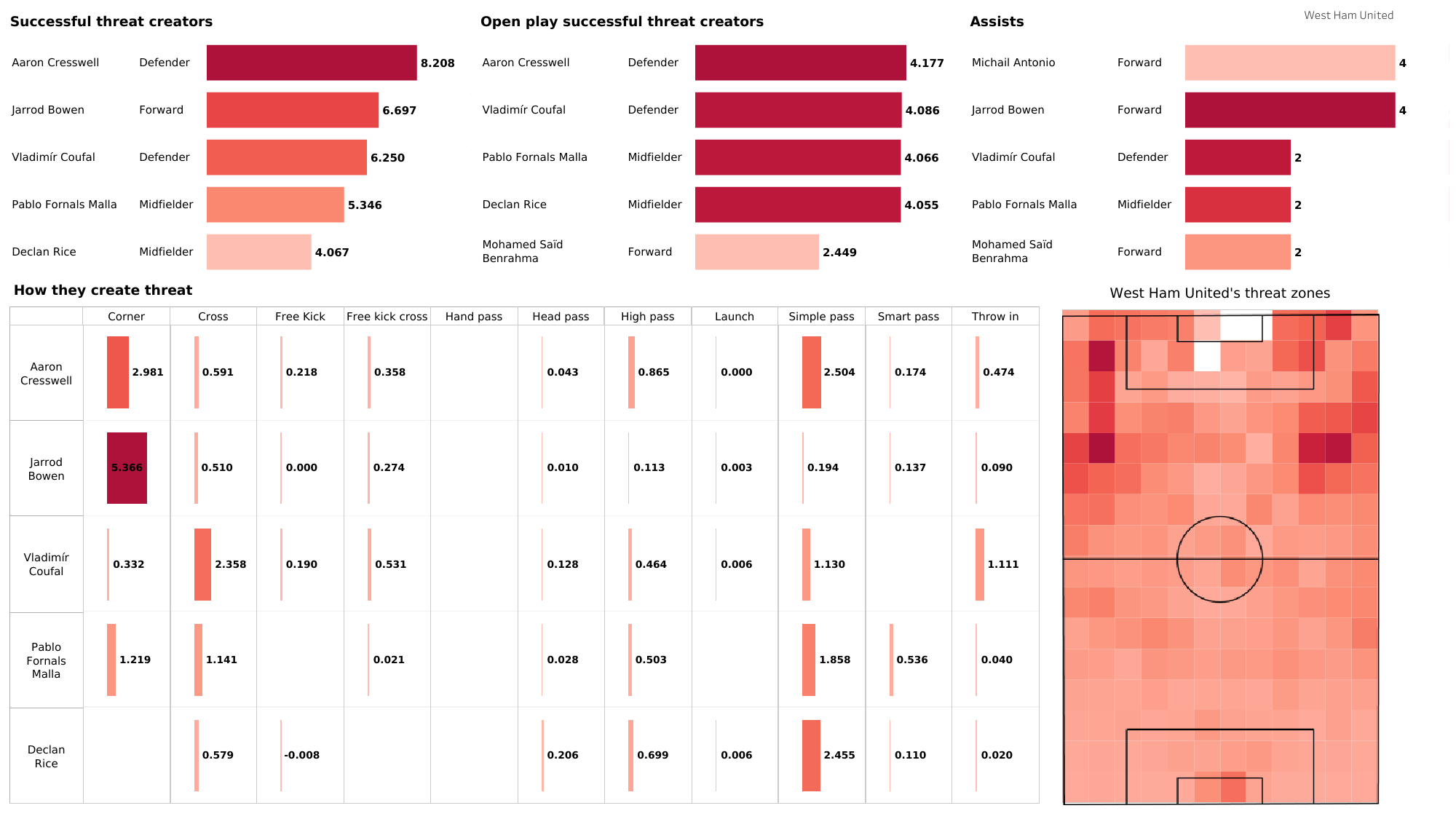 The above visual shows us the xT creation zones for West Ham this season. The map indicates that West Ham have been most threatening from the left flank as they have higher xT creation zones on that side of the pitch. Aaron Cresswell has been their major threat creator from set-pieces as well as from open play. The full-back has generated an overall xT of 8.208 so far and will look to have an impact in Saturday’s game. 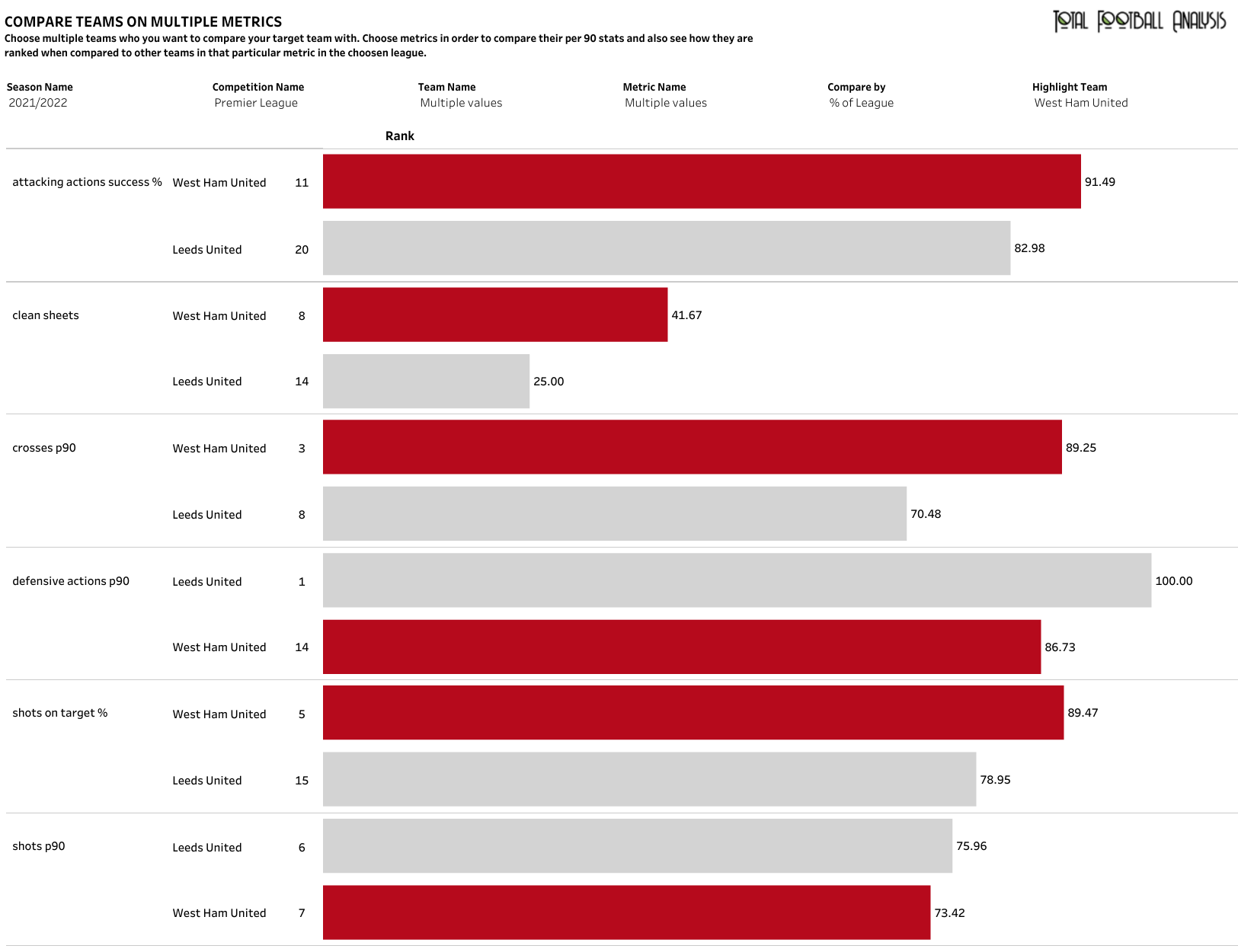 The above visual shows us that, amongst the two teams, West Ham have clearly been the better team in the final third as they completed more successful attacking actions and also have more shots on target than Leeds. Leeds, however, have attempted the most number of defensive actions in the league and also have a high success rate in completing these actions. Leeds also have more shots per 90 minutes but have failed to convert these opportunities they create.

Leeds United are currently in 16th place in the Premier League standings and have not been at their best this season. There is no getting away from the fact that Leeds have struggled to show their best form during the 2021-22 campaign, boasting a record of four wins, seven draws, and eight defeats from their 19 matches. A total of 19 points have left the Whites in 16th position in the table, just eight points clear of the relegation zone, and they have worryingly conceded 15 times in their last four league fixtures. Marcelo Bielsa’s side managed to pick up a huge three points in their league fixture against Burnley, with the hosts running out 3-1 winners at Elland Road courtesy of goals from Jack Harrison, Stuart Dallas and Daniel James. 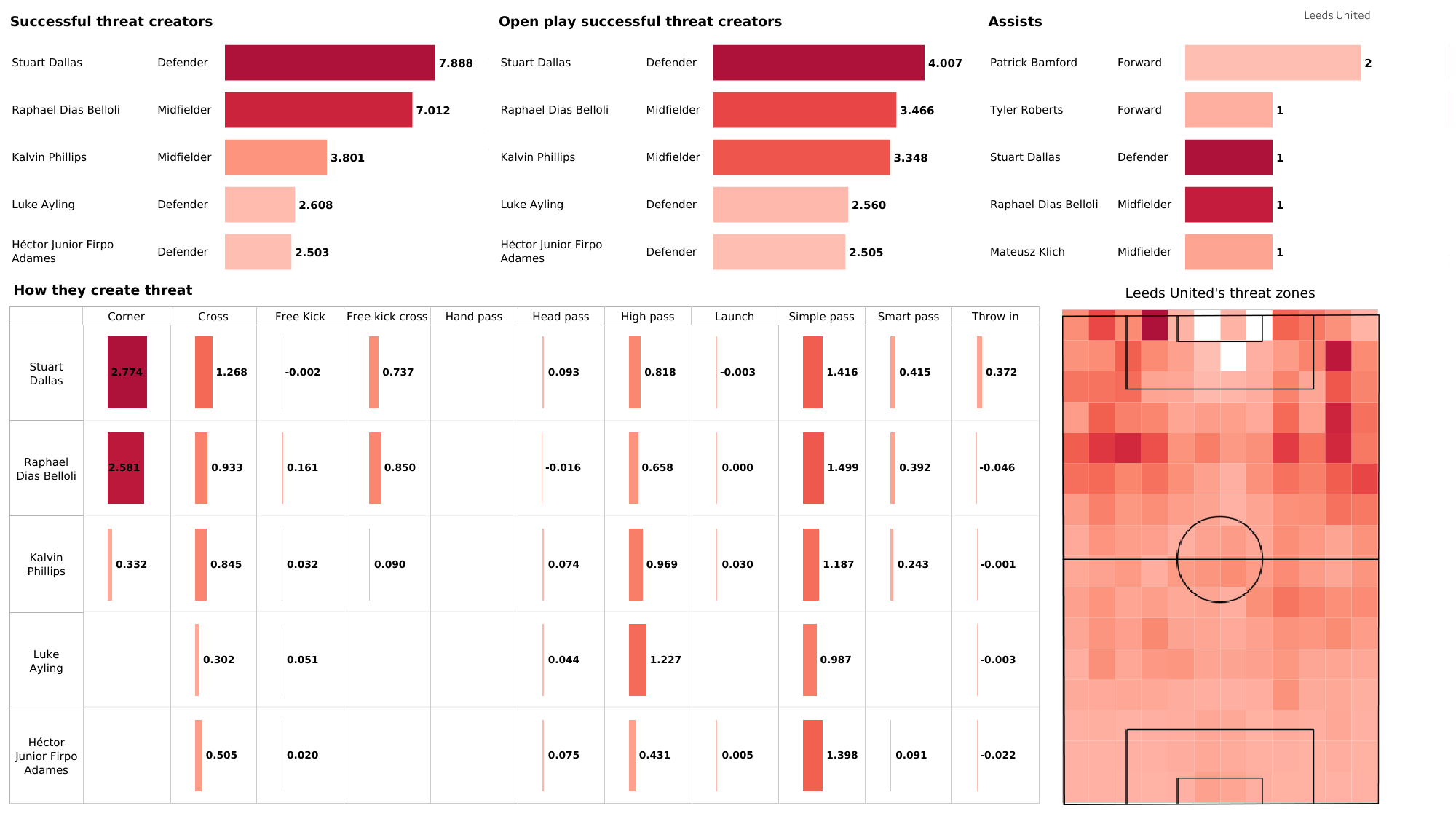 Stuart Dallas has been the main threat creator for Leeds United as he has generated the highest overall xT so far. Dallas has generated an xT of 4.007 from open play and has the vision to spot the right pass in the final third. Leeds have been threatening from both flanks and have had a fair amount of xT creation zones on both flanks.

Leeds are not in any immediate relegation danger at this stage, but Burnley in 17th position have two games in hand over the Whites, and losses in their next two against West Ham and Newcastle United would certainly make the club’s supporters uncomfortable heading into February. West Ham, on the other hand, will look to move closer to their London rivals and strengthen their position in the top four on the table.