Seventh-placed West Ham United welcome league leaders Manchester City to the London Stadium for matchday 37 of the Premier League. The last time these two teams met back in November 2021, the Cityzens won 2-1 at the Etihad Stadium, with goals from Ilkay Gundogan and Fernandinho. Heading into this fixture, West Ham won against Norwich 4-0 at Carrow Road, and Manchester City thumped Wolves 5-1 at the Molineux. 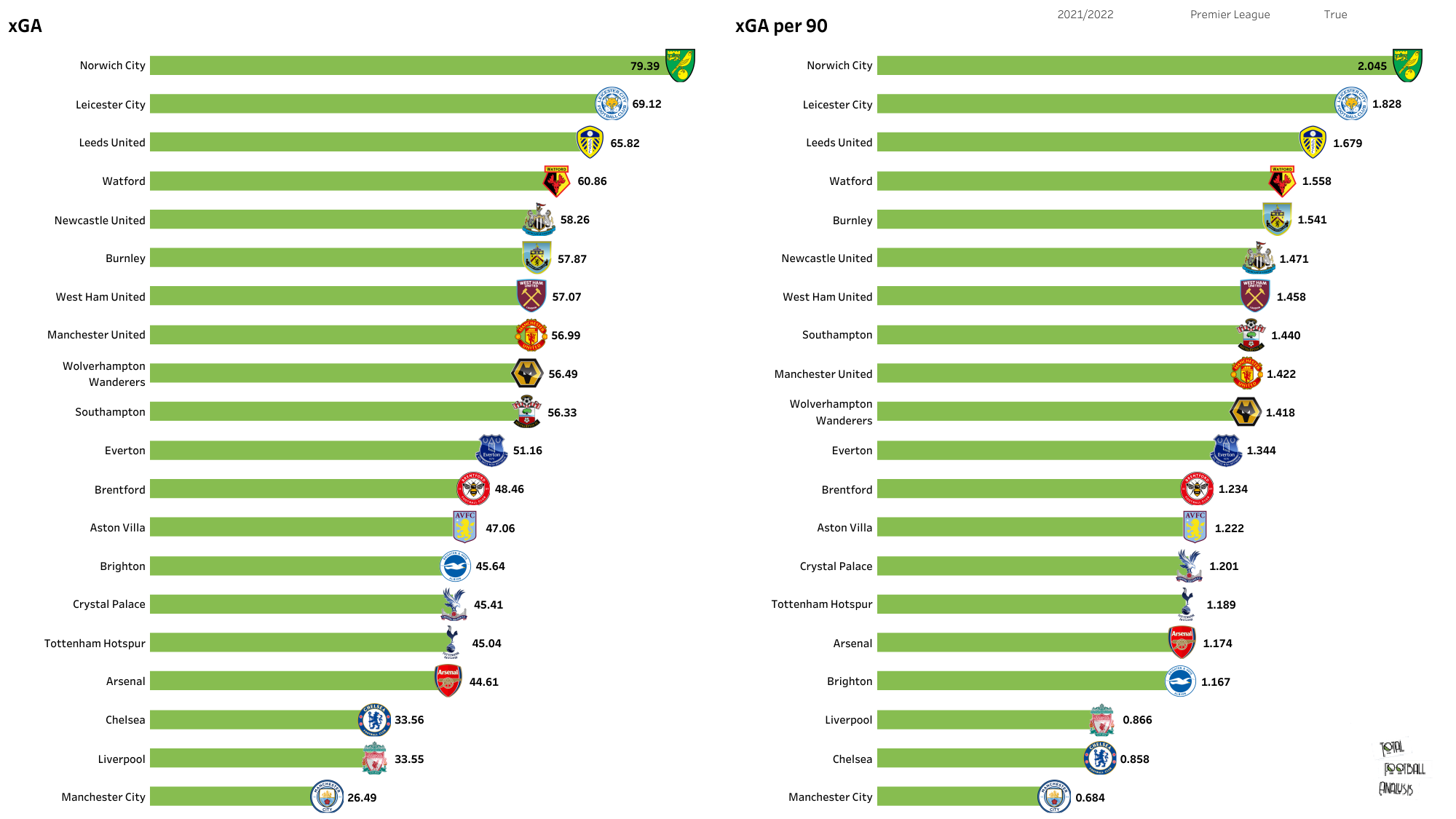 West Ham United come into this match having won against already-relegated Norwich City 4-0 away from home. Said Benrahma netted twice, while Michail Antonio and Manuel Lanzini scored one each. This result leaves the Hammers with 16 wins, seven draws and 13 losses and a goal difference of +11 to their name. West Ham are one of the better performing teams at the back this season, as per xGA. The metric predicted West Ham to allow 57 goals so far this season, but in reality, they have let in only 46 goals. 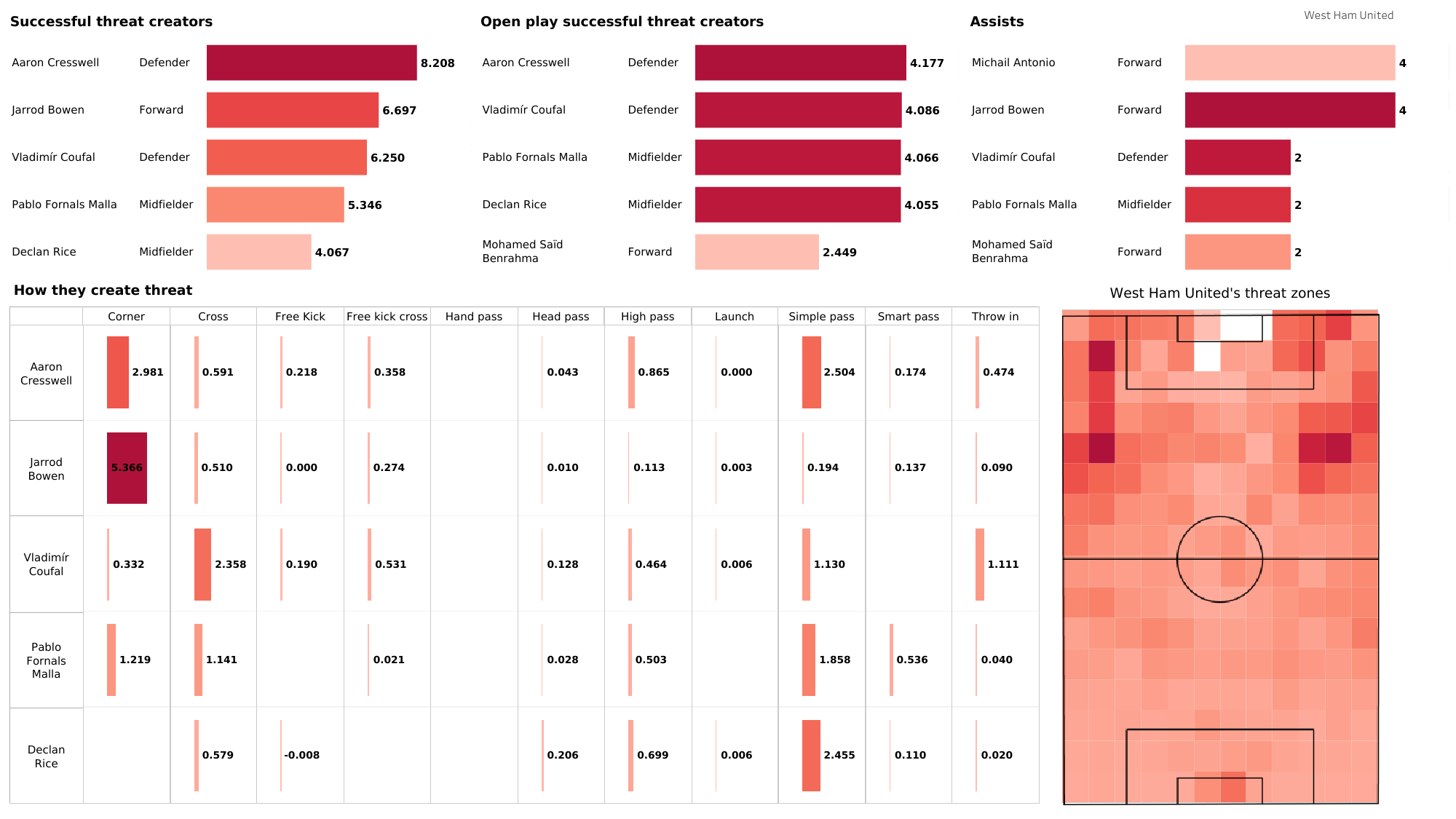 West Ham United’s most successful threat creator this season has been left back Aaron Cresswell, from both open play as well as from set-pieces. The Hammers also have a few other threat creators, including Jarrod Bowen, Vladimir Coufal and Pablo Fornals. Jarrod Bowen is the leading assist maker for the Hammers this season, with 10 to his name. Michail Antonio and Said Benrahma are second and third, with seven and six assists, respectively. 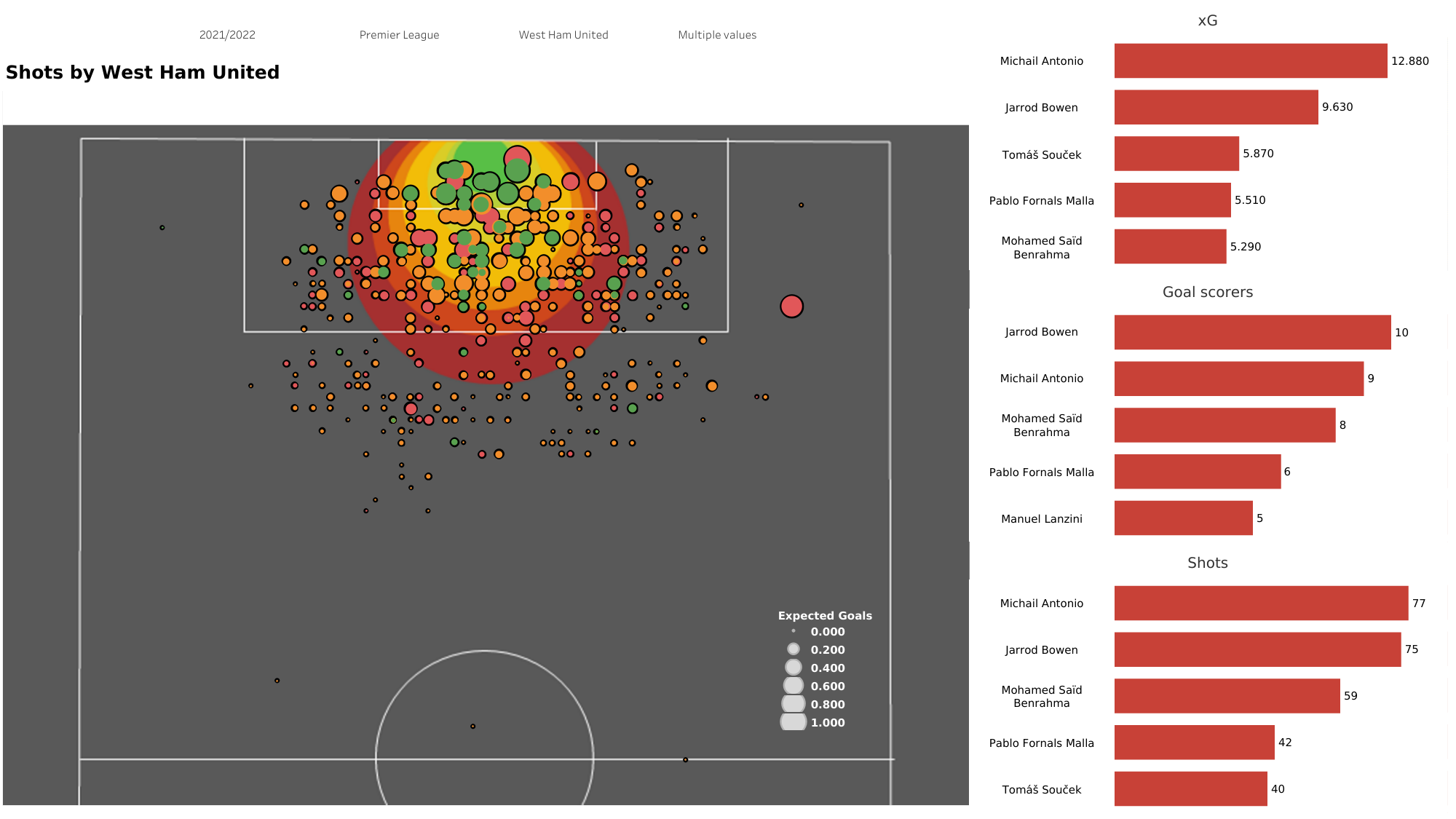 The above visual is the shot map of West Ham United in this Premier League season, excluding the penalties. Jarrod Bowen is the team’s leading goalscorer, with 10 goals to his name. Michail Antonio, Said Benrahma, Pablo Fornals and Manuel Lanzini have five or more goals each to their name. West Ham have missed quite a few big chances that had an xG value of 0.5 or greater. Had they buried them, the Hammers could have had a few more wins and draws instead of 13 losses. 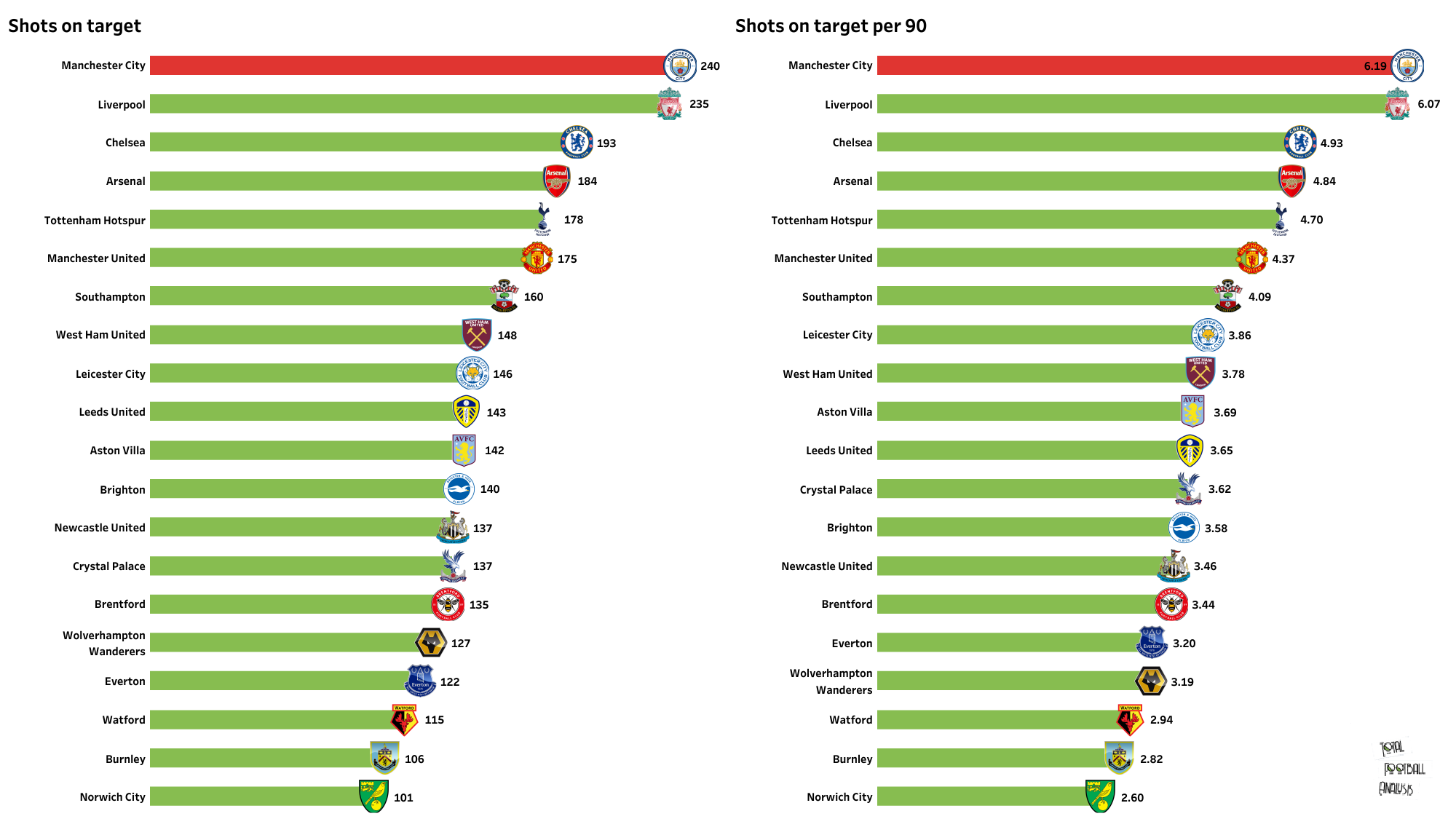 Manchester City come into this game after thrashing Wolves 5-1 away from home. Kevin de Bruyne netted four times, and Raheem Sterling scored the other goal. City now have a three-point gap at the top of the table over Liverpool, and their record stands at 28 wins, five draws and three losses with a goal difference of +72 – the highest not only in the Premier League but also in the top five European Leagues. Manchester City have taken 240 shots on target in 36 games, which is around 6.66 shots on target per match. 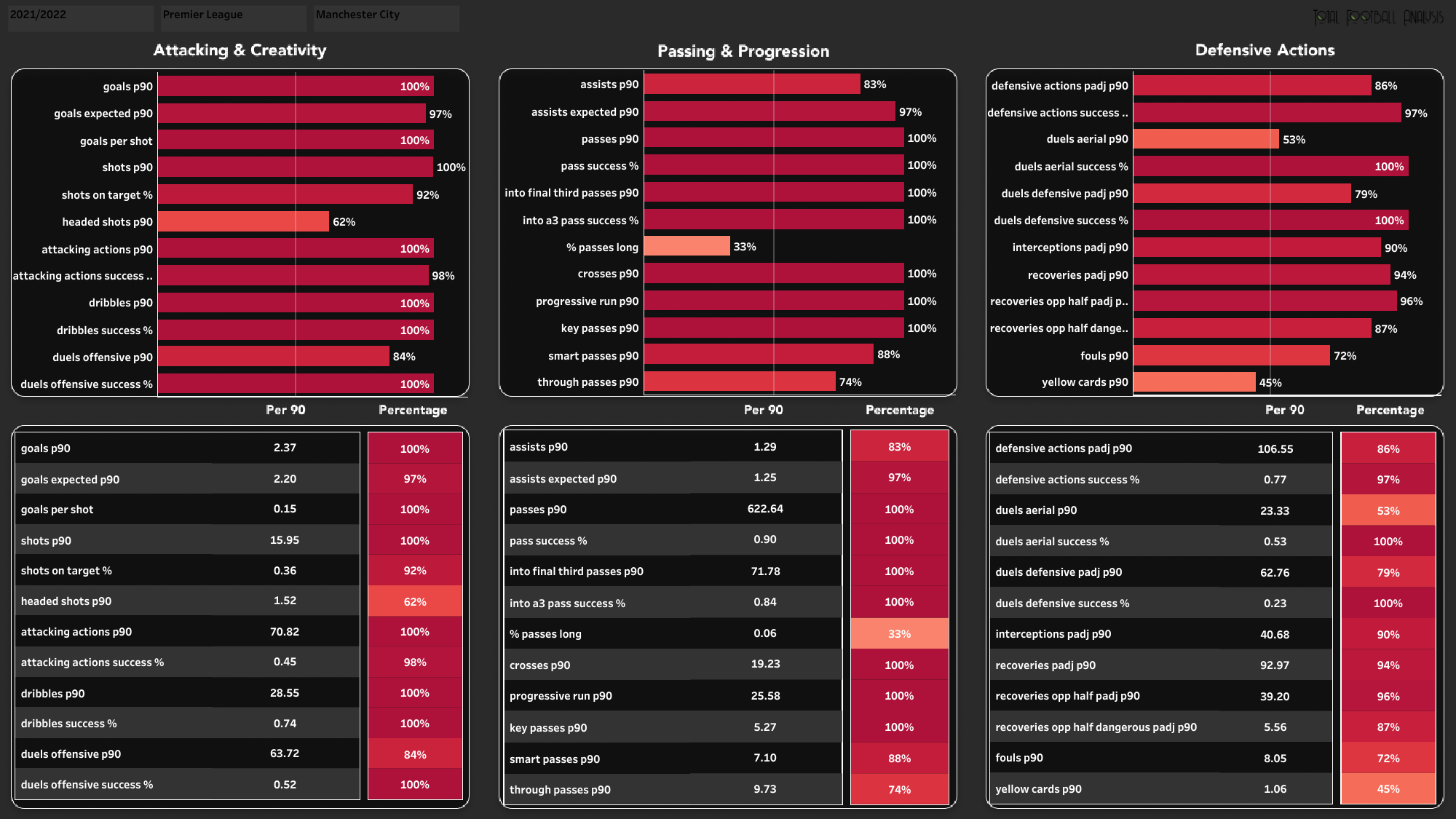 Above are the performances of Manchester City in this season’s Premier League relative to the rest of the league. City rank second in xG per game, behind Liverpool. But thanks to five goals in back-to-back games, the Cityzens have netted the most goals in the league. They rank first in shots per game, dribbles per game, passes into the final third per game, to name a few.

Manchester City will hope to put a clear six-point gap between themselves and Liverpool with a win in this game. However, should West Ham United win this contest, it will give Liverpool a chance to recover the three-point gap. Not only that, the Hammers will surpass Manchester United on the points table due to a superior goal difference should they win this match.