West Ham United will be looking to maintain their four-game unbeaten streak in the Premier League when they visit Anfield to play against Liverpool. Liverpool proceeded to the quarter-finals of the FA Cup after a 2-1 victory over Norwich City, while West Ham United crashed out of the tournament with a loss against Southampton.

Liverpool have advanced to the FA Cup quarter-finals for the first time under Jurgen Klopp, after defeating Norwich City for the fourth time this season. Norwich were organized and defended with discipline but were undone by Liverpool’s swift play. It has been two months since Liverpool last lost a game in all competitions, as they are unbeaten in 14 games. They are currently at the second spot in the points table with 60 points from 26 matches, just six points behind the table-toppers City. The Liverpool attack was too good for Leeds as they crushed the Whites in their last Premier League fixture, with goals from Salah, Matip, Mane, and Van Dijk. Liverpool had a massive xG of 4.81 with 14 shots on target. They had 17 shots on goal from inside the penalty area, and 12 of them were on target. Liverpool have been very good at goal-scoring this season as their goals per game average stands at 2.50, while West Ham’s goal-scoring average is 1.57.

West Ham United are currently at the sixth spot in the points table with 43 points from 27 matches. They will face Liverpool after a 1-3 defeat against Southampton in the FA Cup. However, West Ham have been unbeaten in their last four games in the Premier League and secured all three points against Wolves last week to move within two points of Manchester United. West Ham United have attempted 1134 aerial duels in the Premier League and have won 526. They have won almost 50% of their total duels and are a team who are very threatening from set-pieces. They have the second-most number of shots from set-pieces and have scored six goals from these situations. 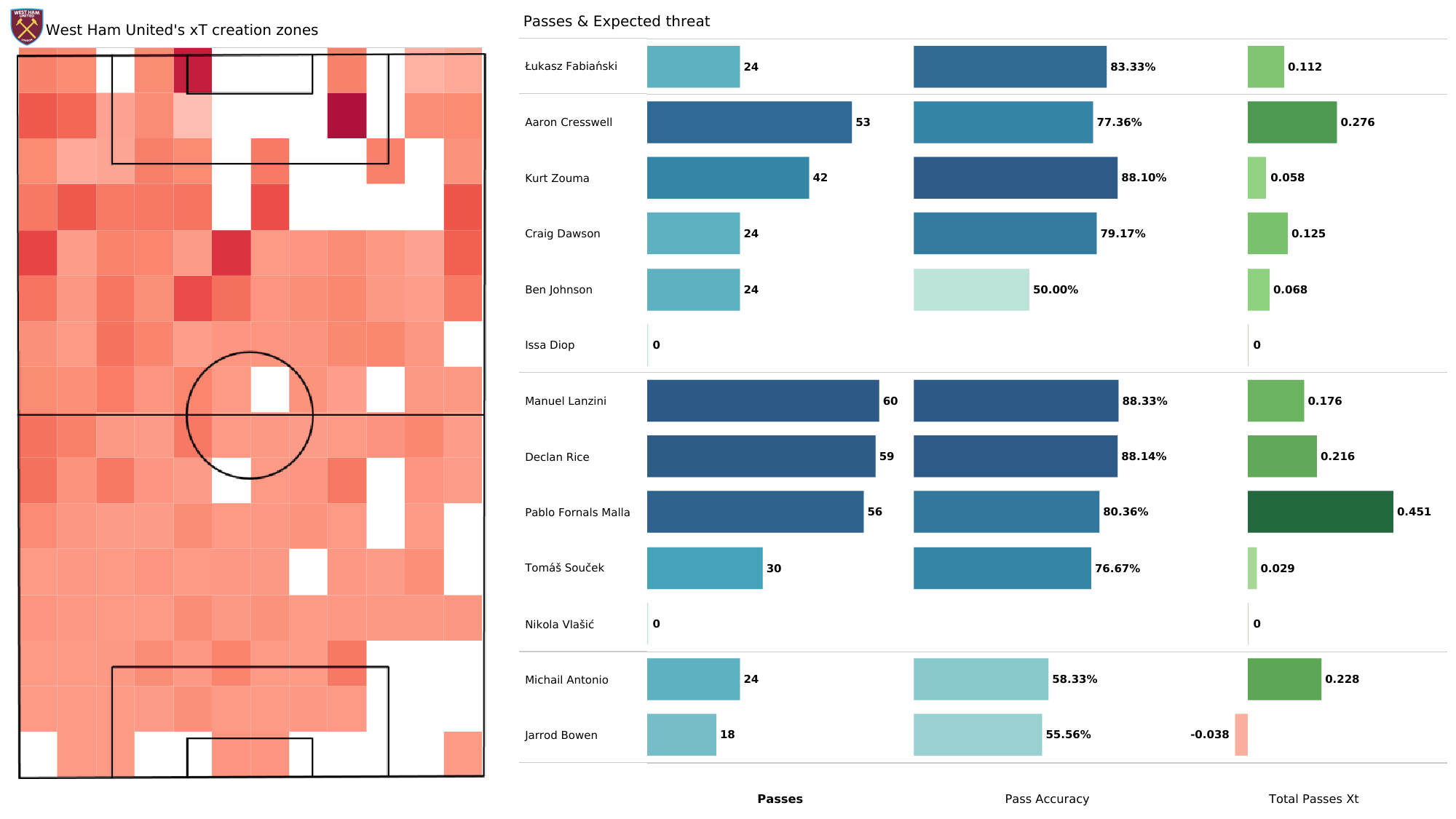 The above visual shows us the xT creation zone for West Ham from their game against Wolves. Pablo Fornals and Aaron Cresswell combined well on the left flank as they had high xT creation zones on that side of the pitch. However, West Ham have failed to find the back of the net recently. West Ham’s inability to break down defenses in a low defensive block has been identified by teams, and they have been doing so to avoid the Hammers from scoring. That won’t be the case against Liverpool as they will be on the front foot.

West Ham did manage to beat Liverpool in the reverse fixture and will hope to put up a similar performance against the Reds this time out. They are unbeaten in their last four games, but Liverpool have been in great form and will make it tough for West Ham United.