West Ham United will be desperate to get back to their early season form as they host an in-form Newcastle United at the London Stadium in the Premier League on Saturday. The visitors, who are now out of the relegation zone, are coming off a 1-0 win over Aston Villa, while West Ham drew 2-2 with Leicester City at the King Power Stadium.

Last weekend, Craig Dawson scored a stoppage-time equalizer to help the Hammers salvage a crucial point against Leicester City. West Ham’s Jarrod Bowen scored as early as the 10th minute. The Foxes, on the other hand, came back to a 2-1 lead, thanks to goals from Youri Tielemans and Ricardo Pereira. But West Ham somehow managed to secure a point. West Ham now sit fifth in the Premier League, two points behind fourth-placed Manchester United. 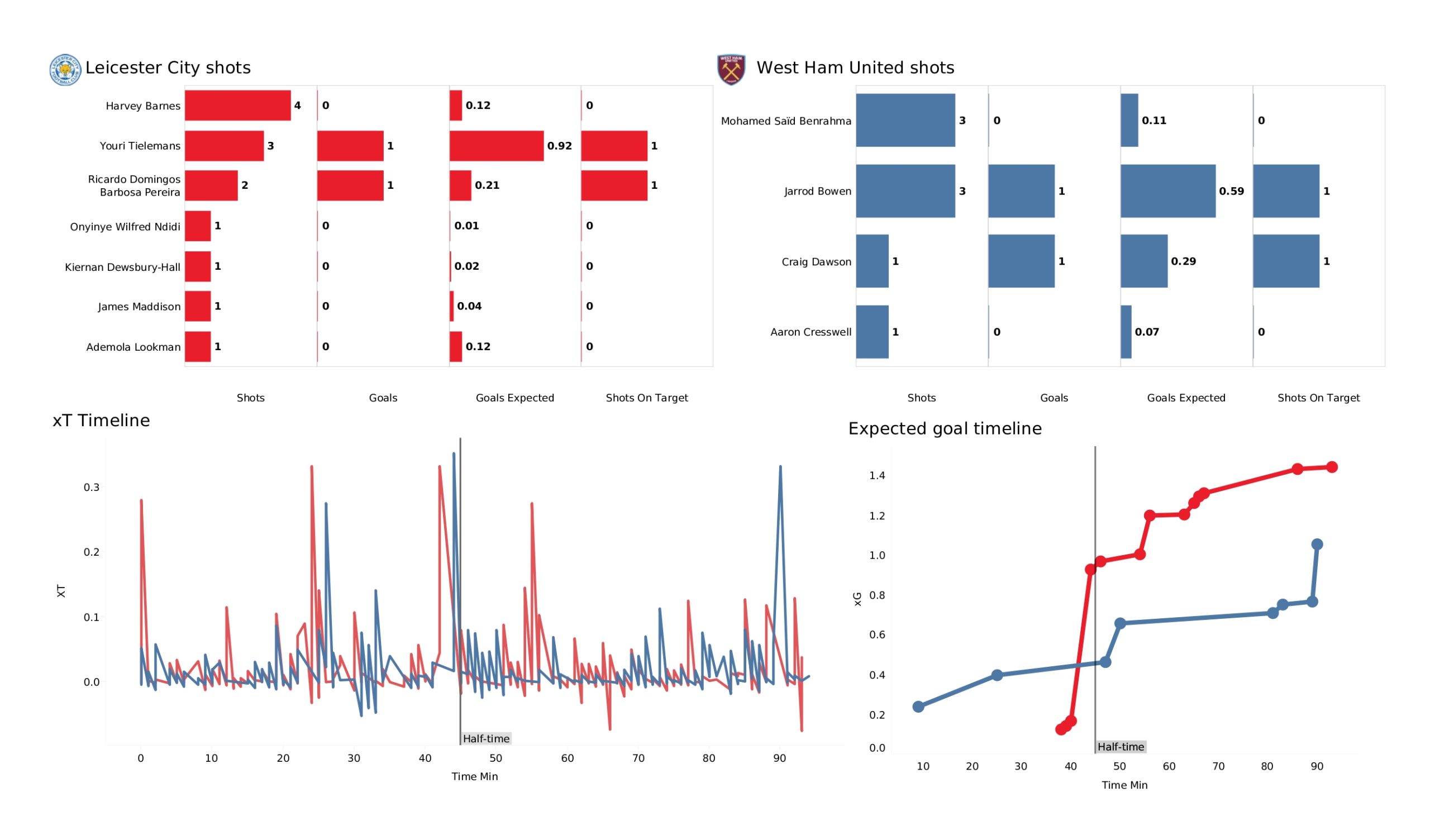 West Ham had a lower number of shots on goal compared to Leicester but still managed to generate a decent xG. They had two shots on target and converted both of these shots. The xT timeline indicates that West Ham took a while to get into the flow of the game and were much better in the second half. Jarrod Bowen generated the highest xG for West Ham with his three shots on goal. 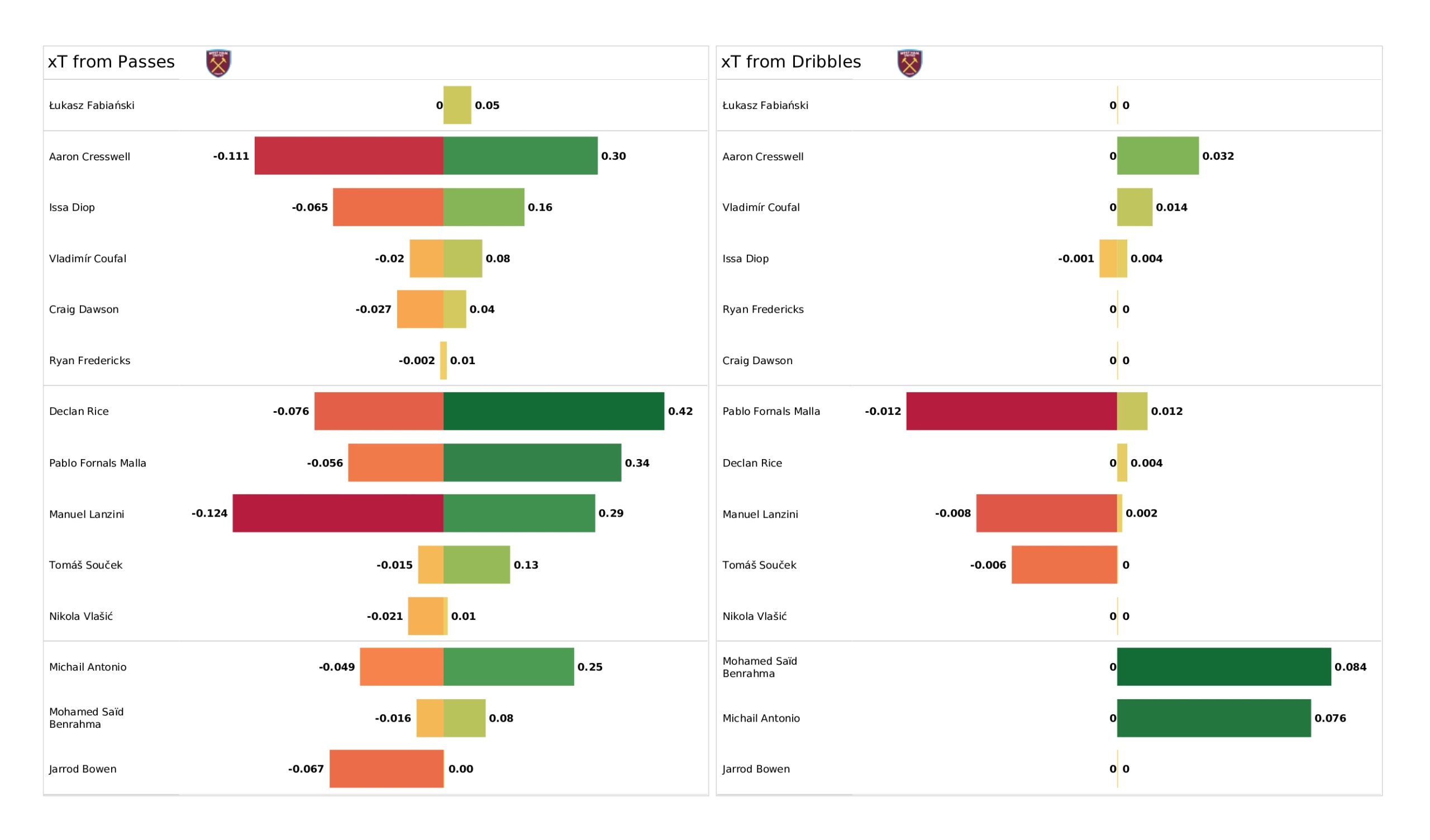 West Ham’s attacking midfielders managed to generate a high very high xT from their passes, as seen in the above visual. Cresswell, too, generated a high xT from his passes as he put in some brilliant crosses into the penalty area. Benrahma and Antonio both managed to get into threatening positions from the dribbles they attempted but Benrahma failed to make the right pass. West Ham will have to capitalize on the early chances they get and try to score first.

Newcastle are unbeaten in their last five Premier League games and have won three of their last four. Newcastle United are now three points clear of the relegation zone, having obtained 21 points from 23 games. Their injury issues, on the other hand, could be disadvantageous to their cause. Kieran Trippier will be out of action for the near future after fracturing his foot. 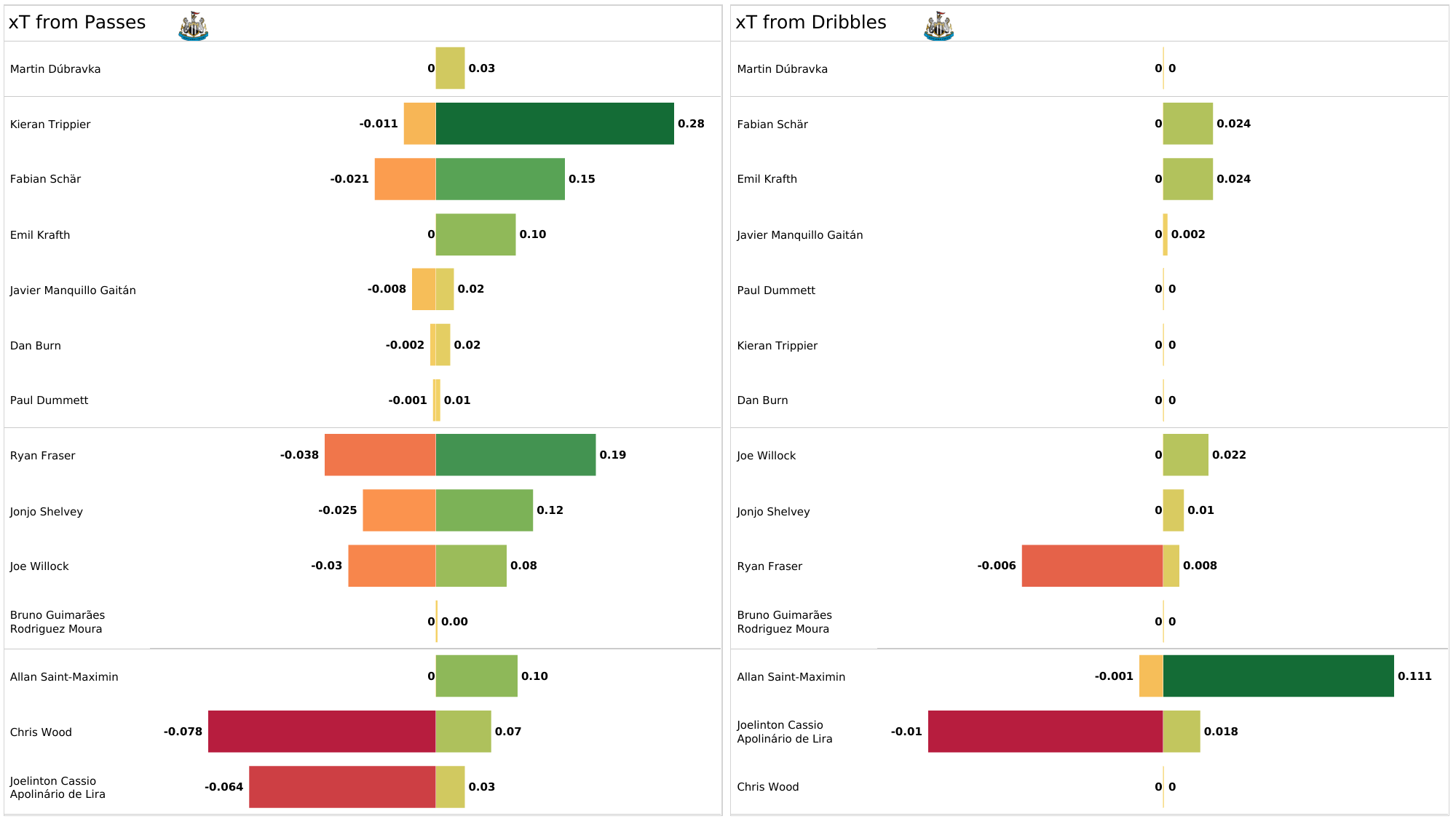 Keiran Trippier’s absence from their remaining matches will be felt by Eddie Howe’s team as the right-back had an instant impact on the team’s performances since his arrival. He scored back-to-back free-kicks for Newcastle in two consecutive matches and also generated the highest xT from his passes against Aston Villa. Saint-Maximin generated a high xT from the dribbles he attempted and got into good positions inside the final third.

David Moyes’ men have just two wins in their last six league matches, and their recent dip in form could prove to be costly in the top-four race. Wolverhampton Wanderers in seventh have two games in hand on West Ham, while eighth-placed Tottenham Hotspur have three, so the Hammers could find themselves sliding down the table over the next few weeks if they are unable to put some wins on the board.